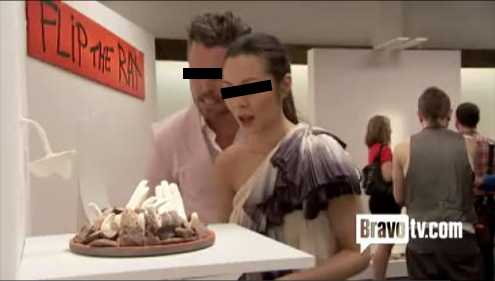 I couldn't agree more with the opening line of the Artinfo article: "First there was an earthquake, then the hurricane, and now... the return of Bravo's "Work of Art: The Next Great Artist"! Harbingers of end-times are aplenty this week, it seems." Bravo's Work of Art is back for Season 2. I suppose this season has a chance of turning the show around--I was glad to see at least a few of the names on the list of participating artists. I'm already positive that Sucklord will receive more attention for his name than anything else.

In some rather ridiculous Thursday reading, a gallerist accuses a SpongeBob animator of hiring his personal band of "martial arts experts" to attack her. Oy vey.