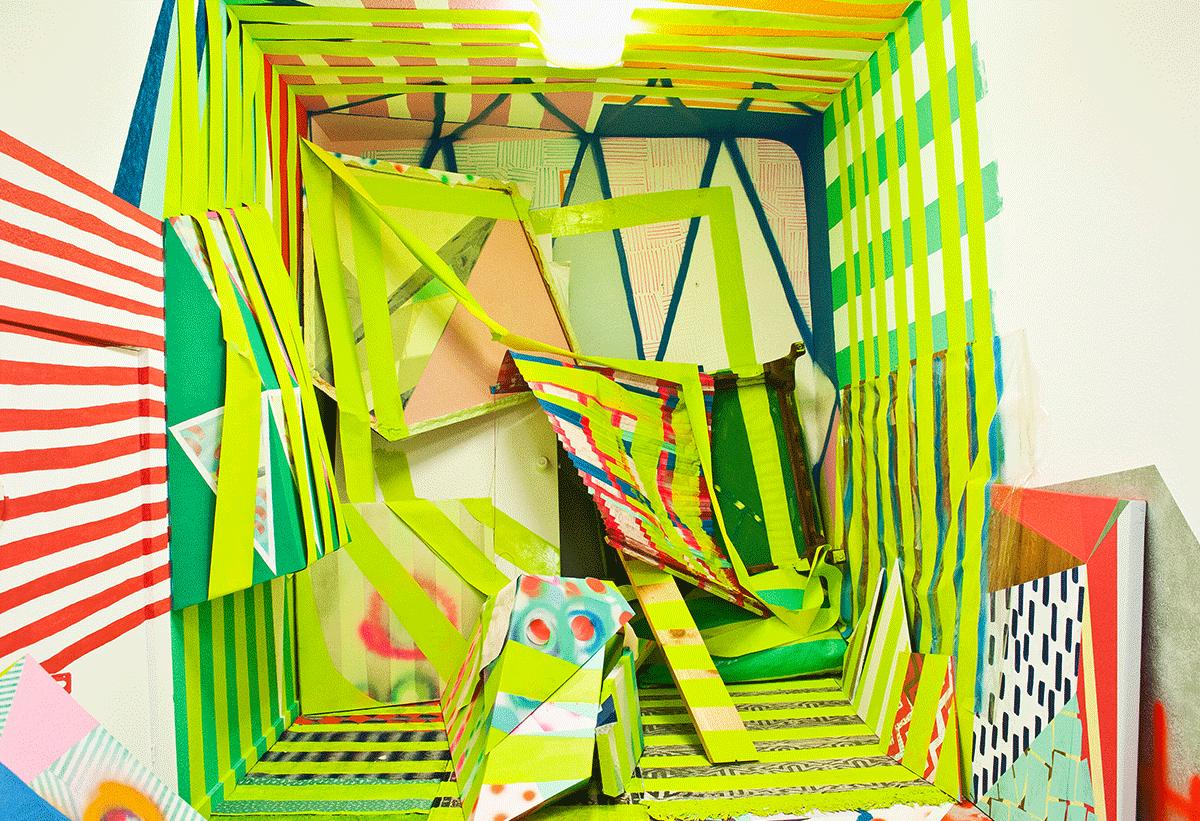 SOFIE RAMOS
AN EQUILIBRIUM WHICH KEPT EVERYTHING IN MOTION BUT PREVENTED IT FROM GOING ANYWHERE
SEPTEMBER 10 – DECEMBER 22, 2015
OPENING: THURSDAY, SEPTEMBER 10, 6-8pm

Projective City and Mixed Greens are pleased to present an equilibrium which kept everything in motion but prevented it from going anywhere, an ambitious, site-specific, collaged installation by Sofie Ramos that will transfigure the entire gallery.

Ramos relies on an improvisatory process when creating large-scale installations. After an initial layer of shape and color—comprised of paint, paper, wood panels, found furniture, and other objects—is placed into a space, she continues to build, paint, cut, reorganize, deconstruct, and add until she has exhausted herself and the material, ultimately creating a successful, room-sized composition. In between the repetitive actions of adding, layering, and shifting, a push-pull narrative unfolds as the boundaries between developments and deteriorations begin to blur. What was essential to the structure of the composition becomes excess. What was logical seems nonsensical; pleasure accelerates into nausea; ordered systems become chaotic; new systems of logic and order emerge; new forms of pleasure materialize. The question of what is essential becomes inessential.

This exhibition is the incidental outcome of an intuitive yet strenuous process of manipulating space through a series of radical interventions and subtle alterations. The gallery, known to be a generic and clinical white cube, disappears as materials consume the walls and viewers are forced to navigate the terrain in unexpected ways. Despite the unabashedly bold presentation, the lingering sentiment is one of poetic irony rather than aggression as its temporality—both in its making and its inevitable demolition upon the end of the show—cannot be separated from the installation.

This is Mixed Greens’ eighteenth installment of Paris-Scope — a series of peculiar, collaborative exhibitions that give visitors to Mixed Greens a glimpse into French-based Projective City’s gallery space. The unique series provides a new possibility for the practice of exhibiting aesthetic experience, and allows artists unprecedented control over the gallery space. Through this alchemical experiment into the possibilities of “action at a distance,” the viewer is able to peer into (but obviously not enter) the space both thousands of miles away and inches from his or her nose — to mystically be both HERE and THERE simultaneously. For more information, visit: www.projectivecity.com/parisscope-general-information