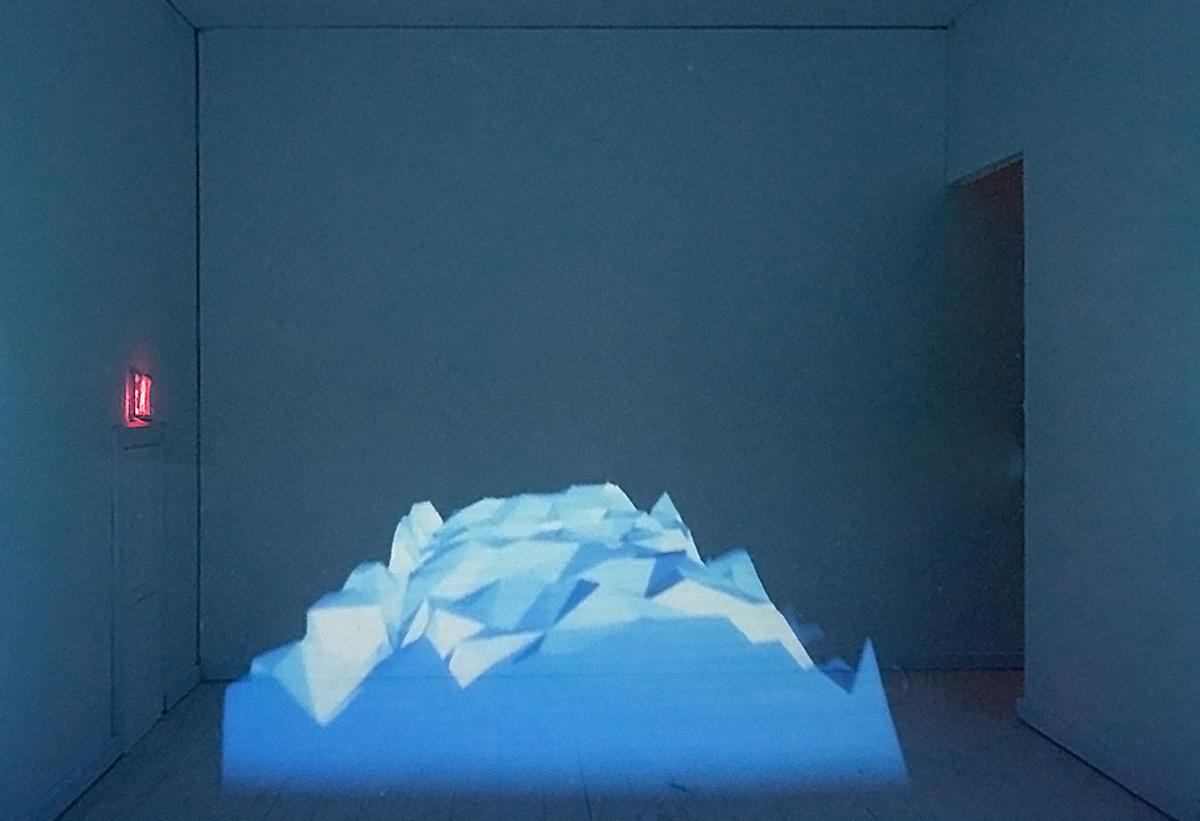 Projective City and Mixed Greens are pleased to announce the exhibition of Mirror Lake by New York City based artist Rahul Alexander. His cross-disciplinary approach to art, design, painting, and collaboration, has presently culminated into a holographic landscape inspired by Eadweard Muybridge’s 1872 photograph of Mirror Lake in Yosemite National Park. As this incredible area has been recaptured again and again by thousands of visitors, Muybridge’s photograph has also become an icon of spectacular beauty. Alexander re-contextualizes both the image and the experience by way of extracting topographical data of the area via the U.S. Geographical Survey database. This data, rendered into an animated hologram of the site, allows viewers to experience the landscape in a newly abstracted format. In this process, the aesthetic experience is simplified into quantifiable data and then transformed into an equivalent, paralleling the way in which American artists were commissioned to create images as the Western frontier was explored. Given the fact that there remains practically no region on earth that has not been statistically quantified, Alexander’s process suggests an ambiguous position concerning technology and representation. On the one hand, the precise, crystalline modeling presents an unquestionably artificial experience of the site (as surely our numerous photos are far more emotive), but on the other hand, the robustly quantified hologram strips the cliché from the landscape and allows for an entirely new form of experience. As both representations (the photo and the hologram) are ultimately idealizations of a space, the project involves not only the use of technology as a way of re-exploring previously trodden terrain but also as a way to re-evaluate our perpetual need to find new frontiers.

Rahul Alexander received his BFA from Tufts University, his MFA from Pratt Institute, and is a fellow of the Artist in the Marketplace Program at the Bronx Museum of Art. He is a founding member of the collective BroLab as well as the HOTEL live-work artist space in Bushwick. Alexander lives and works in Brooklyn, New York.

This is Mixed Greens’ seventeenth installment of Paris-Scope — a series of peculiar, collaborative exhibitions that give visitors to Mixed Greens a glimpse into French-based Projective City’s gallery space. The unique series provides a new possibility for the practice of exhibiting aesthetic experience, and allows artists unprecedented control over the gallery space. Through this alchemical experiment into the possibilities of “action at a distance,” the viewer is able to peer into (but obviously not enter) the space both thousands of miles away and inches from his or her nose — to mystically be both HERE and THERE simultaneously. For more information, visit: www.projectivecity.com/parisscope-general-information