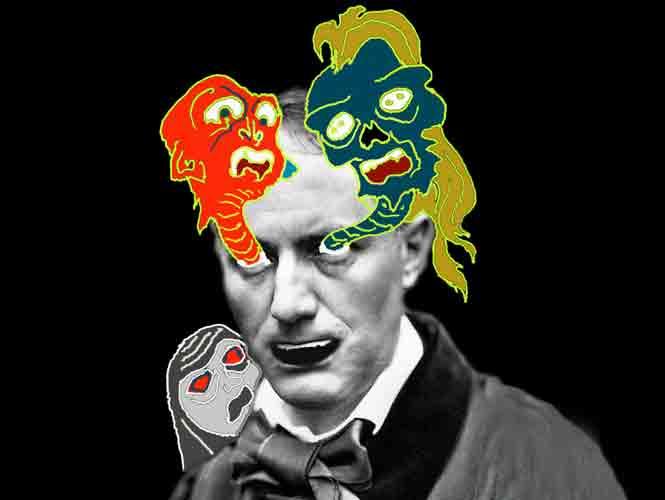 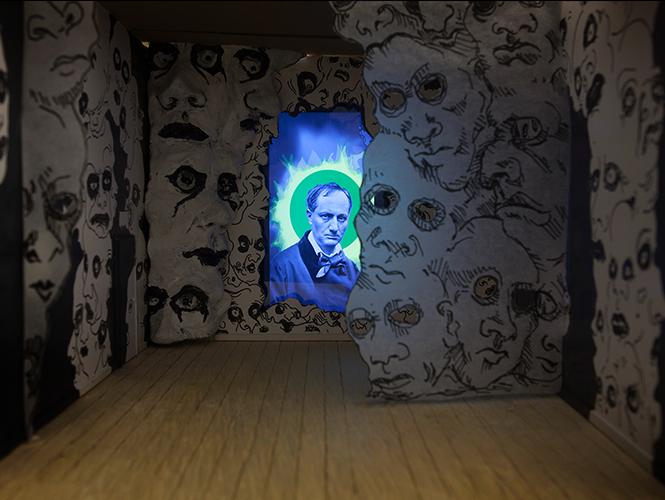 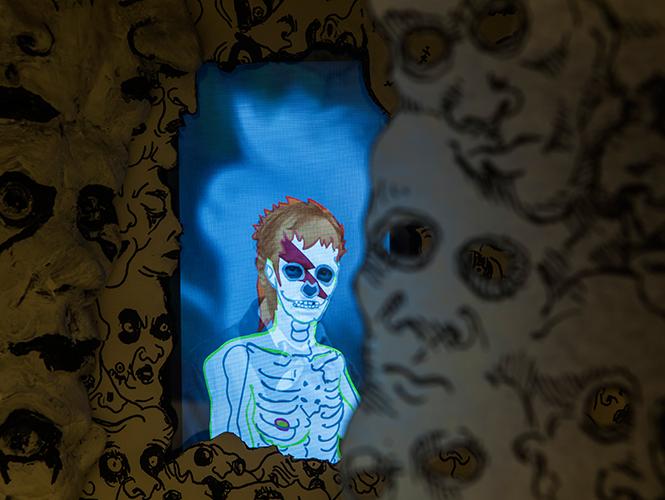 Mixed Greens and Projective City are pleased to present the work of Mike Estabrook through the Paris-Scope.

The tomb of Charles Baudelaire in the Cimetière du Montparnasse remains, after almost 150 years, a place of pilgrimage for misspent youths, idiot poets, foolish and savage dreamers, delinquents, literary wonks, and drunks with delusions of genius. His hauntings are now perhaps just as legendary as his life, and his indestructible phantom remains a source of inspiration for misanthropes, skeptics, and subversives of all stripes. Yet how can this ghost, this apparition who gave modernity its very name, continue to haunt a decidedly post-modern milieu? The purgatory into which Baudelaire must surely have been cast has itself become obsolete in contemporary life, which so easily provides redemption at low cost in thousands of assorted flavors. No longer burdened with the effort of escaping purgatory, Baudelaire's ghost has chosen to manifest itself at Projective City, conjured through the dark and plastic arts of Mike Estabrook.

Continuing Estabrook's epic "The Book of the Dead" project, The Lair of the Phantom Dandy places the viewer in the role of the journeying soul, presenting a Dorothy/Orpheus encounter with the Wizard of Oz/ Hades. Transforming the gallery space into a macabre grotto, the viewer can attempt to glean messages (over a mystic telephone located in the Mixed Greens gallery) from this ancient oracle of the modern age. Estabrook's channeling has resulted in a space which is at once an homage to a great spirit and a two-way conduit to the netherworld where Baudelaire now comfortably resides.

Mike Estabrook is a Brooklyn-based artist with recent solo projects at Bliss on Bliss Art Projects, Queens, NY; Art in Odd Places, NYC; and the Krannert Art Museum, IL. He has held residencies at the LMCC Swing Space and Workspace, NY Arts Beijing, and the MacDowell Colony. Currently, he is the recipient of a 2014 BRIC Media Arts fellowship, helping him to continue his explorations of the afterlife.

This is Mixed Greens’ thirteenth installment of Paris-Scope — a series of peculiar, collaborative exhibitions that give visitors to Mixed Greens a glimpse into French-based Projective City’s gallery space. The unique series realizes Projective City’s mandate of finding new possibilities for the practice of exhibiting aesthetic experience, and allows artists unprecedented control over the gallery space. Through this alchemical experiment into the possibilities of “action at a distance,” the viewer is able to peer into (but obviously not enter) the space both thousands of miles away and inches from his or her nose — to mystically be both HERE and THERE simultaneously. For more information, visit:
www.projectivecity.com/parisscope-general-information/

Where to catch some of our gallery artists this Fall~ KIM BECK in the 2014 Pittsburgh Biennial @ The Pittsburgh Center for the Arts (Going on now through November 2nd).

Beck is part of the twenty-three Pittsburgh based artists showing paintings, multimedia, video installation, and sculpture at the Pittsburgh Center for the arts, in conjunction with seven other exhibitions as part of the Biennial.

Still up is Beck's NOTICE: A Flock of Signs  at OMI International Art Center in Ghent, NY. SONYA BLESOFSKY: Estuary @ The New York Foundation for the Arts

The group exhibtion includes work by 2013 arists' fellowships program (AFP) finalists. Blesofsky's work is under the Architecture/Environmental Structures/Design portion of the show along with Lee Boroson and Sun Kwak. 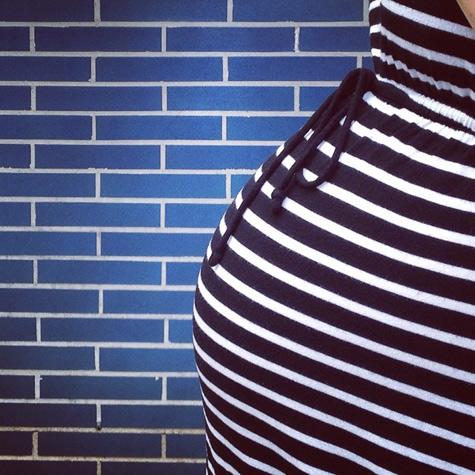 Some of you may have already known from previous photos from the blog, but here is our official announcement: HEATHER IS PREGNANT!! She actually has been pregnant for the past 40+ weeks, and the baby is due any second. She might even be having the baby right now as I am writing this blog post.

In celebration of whom Mark Mulroney referred to as Rishi and Heather's new collaborative collage also known as "Untitled," we will be having a baby countdown for the next few days. We are SUPER SUPER SUPER EXCITED to see this baby!! 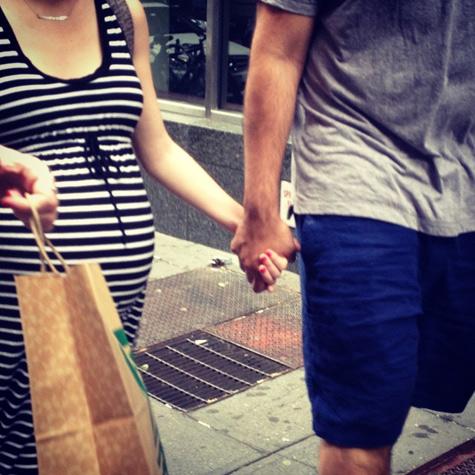 Here is an extra photo of Heather and Rishi being super cute holding hands. This photo makes my heart melt a little bit *tears* 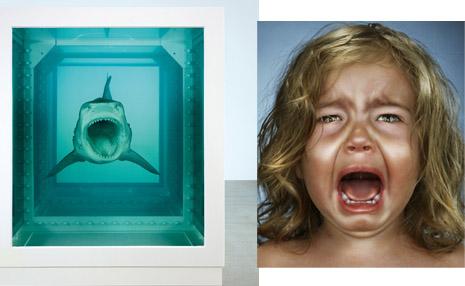 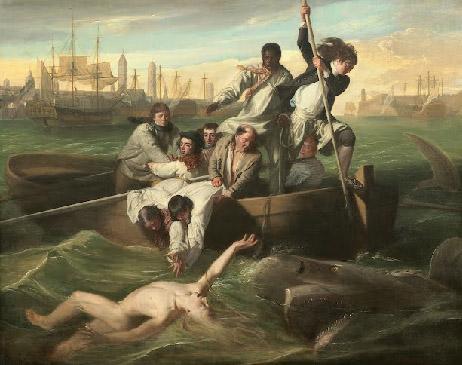 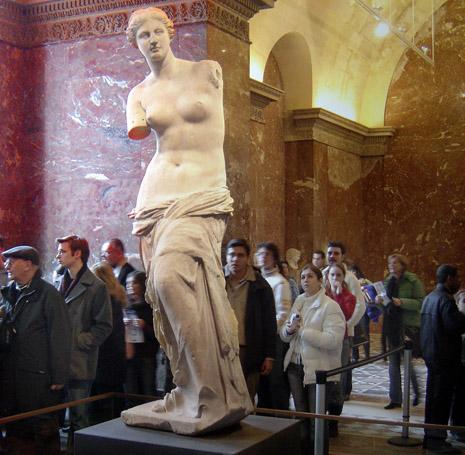 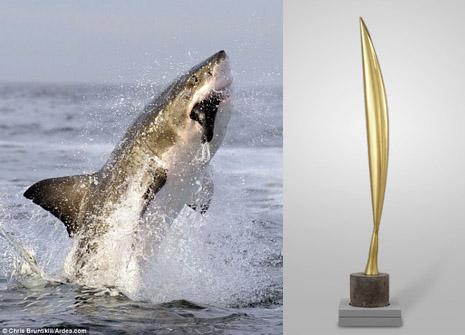 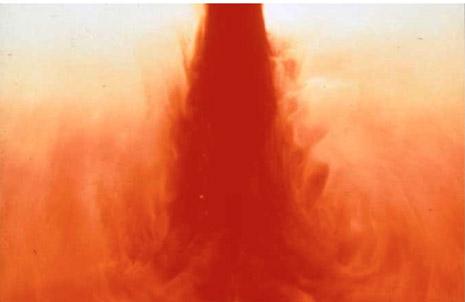 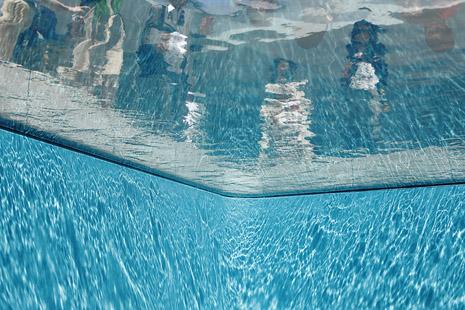 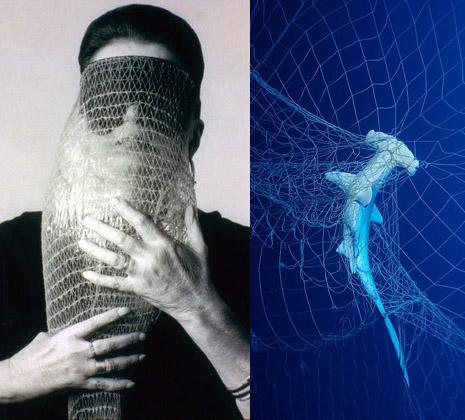 Multiplicity is reviewed on the New York Times! This is our second review of 2014 after Hooray for HOLLYwood! was review last January. We're so glad to be part of the show with NURTUREart and Invisible-Exports. Much love!

An hour into my first day at Mixed Greens, I sustained a mildly traumatic flesh wound whilst preparing our storage space for Naomi Reis’s window installation. Vaguely perplexed and mildly uncomfortable to look down and see an extremely fleshy fissure running through my forearm, I limply mumbled, “I’m going to use the bathroom” as Chuka, Rob, and Nati began circling around me in hurried frenzy.

An hour later, a Swedish doctor lady was gifting me my 13th suture while Nati held my hand. A creepy urgent care TV relayed sterile jeopardy-style questions along the lines of “this nickelodeon band won a 2001 grammy” and I seriously contemplated the scope of my existence.

I left NY Doctors around 1:30 to a text that I couldn’t go home, because I was living with actresses I had met on Craigslist and they were filming a “professional music video” in our living room. So I spent the afternoon in midtown at my sister’s 24th floor office, alternating between swallowing pain tranquilizers and lackadaisically playing Tetris in her firm’s conference room.

The next day I returned to work at Mixed Greens because I was a little confused and couldn’t quite fathom what else to do with myself. Long story short, I spent the day running around the flower district with window artist Naomi Reis; despite a freshly stitched wound, watching installation and buying beautiful plants constituted one of my favorite days of the summer. When the Adia/Kimberley show opened the next night, I served drinks and sauntered around like a daintily wounded bird and I knew that Mixed Greens was the perfect office to summer in.

My season here was so much fun and I leave extremely grateful to Heather, Steven, Monica, Nati, Chuka, and Rob for all I have learned and seen. Having entered relatively unfamiliar with the domains of buying and selling art, but very interested in conceptual contemporary art, I constantly felt I was either learning new skills or applying my strengths and interests.

As a design student, I return to school with a million ideas and a fresh perspective on art//design//urbanism//the environment. For any students of art, design, art history, etc: the staff at Mixed Greens created a fabulous intern experience that I could not reflect upon more highly.
Ciao, blog readers. xo 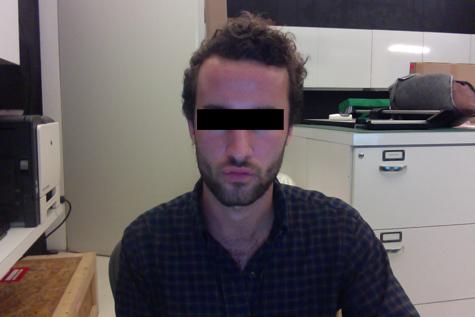 How/When/Where are the windows viewed? 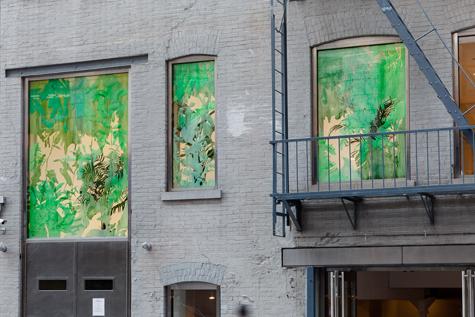 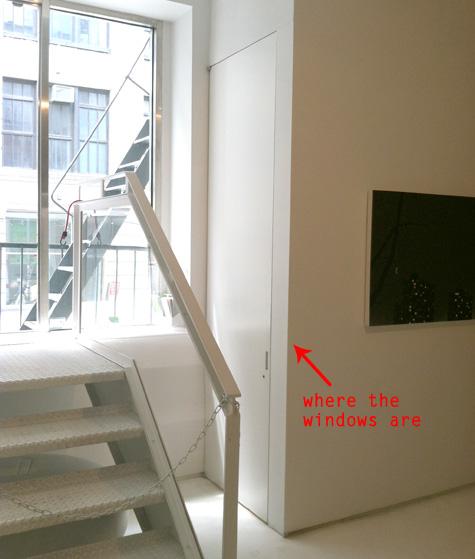 The windows are viewable ONLY from the street. Your installation will not be accessible to viewers within the actual gallery space. The gallery closes at 6pm, but the windows stay lit until 10pm, meaning your piece should be able to function both during the day and night.


What are the measurements and technical specifications of the window space? 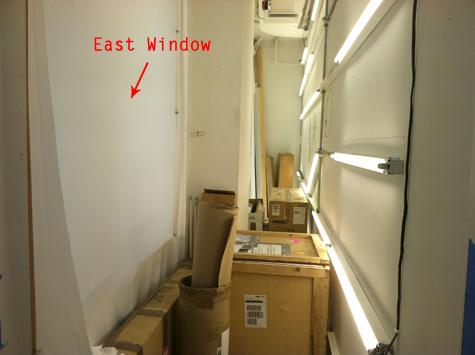 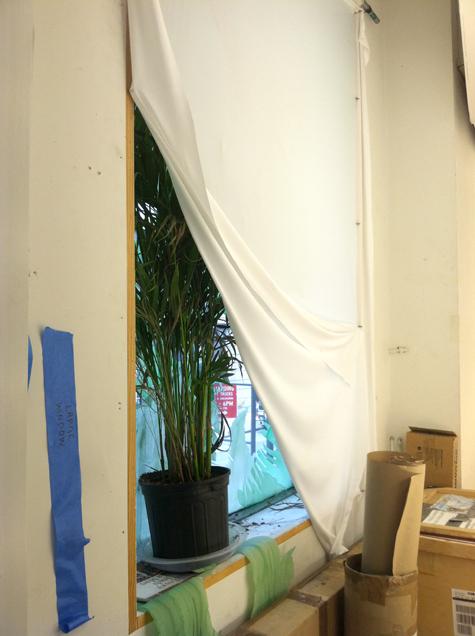 For a diagram of the window specs, please click here.

The back wall has space for 34 fluorescent tube lights, each 45” long, which would be provided for use should they be required. Artists are not required to use these lights, and can opt to use all, some, or none of them. It should be noted, however, that if opted not to use these lights, the artist would be required to provide their own lighting to make the piece visible day and night.

There is one simple electrical outlet at the rear of the space, adjacent to the west window. It is hidden by storage items (which can be moved) in these images. 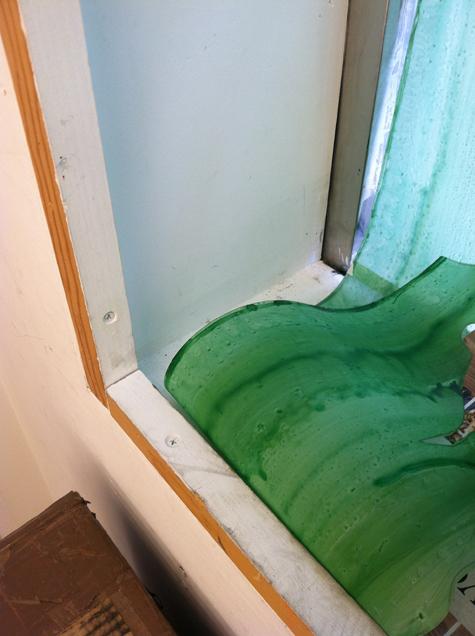 Each window has a sill, and each sill is roughly 12 inches deep. The flat base of the sill is 8.5 inches deep, with a lip at either end. There is a 35 ½ inch distance between the sill and the back wall (where the fluorescent tubing is attached). We use this space as storage on a case-by-case basis, but we can clear out the area if the window installation requires more space.


Can I hang objects from the ceiling? 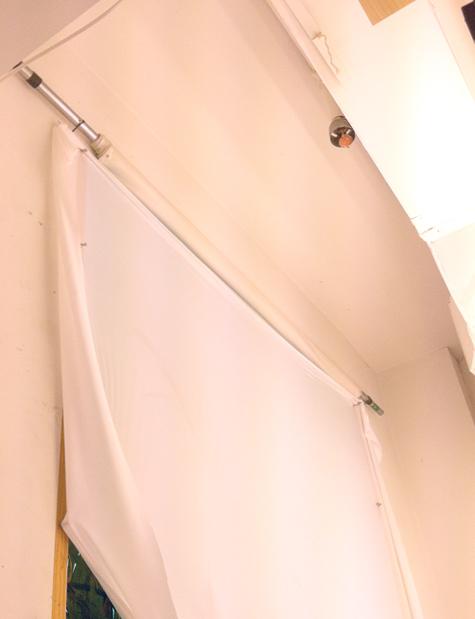 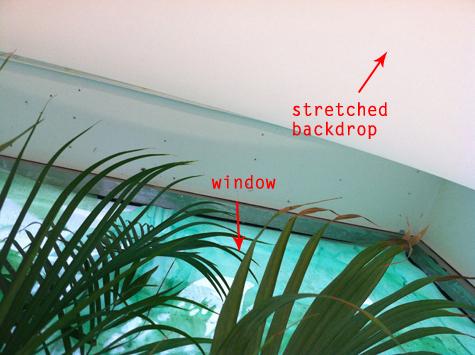 Yes. You CAN drill into the ceiling, walls, and sills. However, there is HVAC piping on the ceiling, as well as fluorescent tubing/accompanying electrical fixtures that may be obstructive (see images above).


What alterations to the windows are allowed?

As a general requirement, all windows must be able to return to their original state during de-installation (i.e no scratching of the glass, permanent stain, etc.).


What will increase the chances of my proposal being accepted?

We are looking for proposals that are simultaneously site-specific and conceptually coherent with the artist’s regular studio practice. The window proposal should not be a one-off project. The more specifically your proposal pertains to our windows in an engaging and plausible way, the more likely it will be accepted. We also enjoy proposals that have mixed media.

Will I get paid for any expenses?
If accepted, the artist will be given a $500.00 honorarium.

While the late summer has been moving at a comfortably sedate pace in Chelsea, Mixed Greens artist Mary Temple has kept busy installing a three-part show in Japan. Mary’s show, titled “Visual Deception II: Into the Future,” is hosted at three venues in Tokyo, Kobe, and Nagoya. As I write comfortably from the liberally air conditioned office, her assistant is installing the first part at the Bunkamura Museum of Art, Tokyo, which will be up from August 9 – October 5. Mary sent us a couple of install shots; we hope to have more soon. 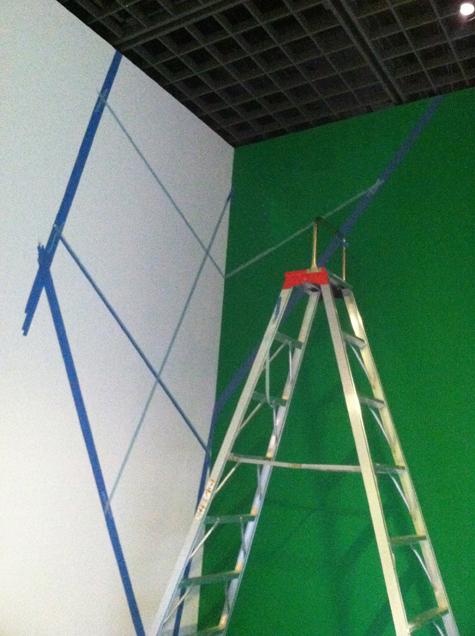 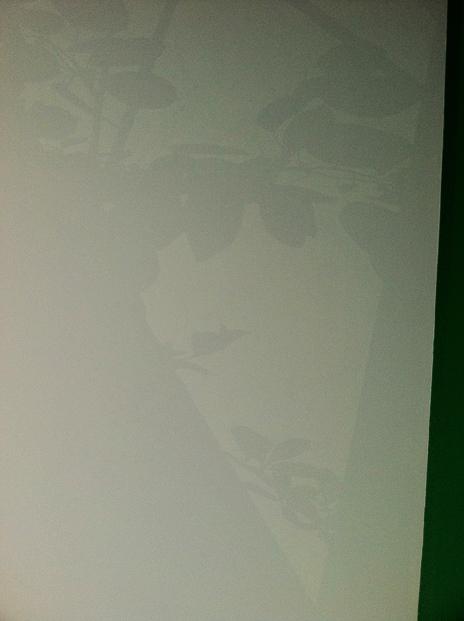