Over the Weekend + a Very Special Rob Carter Award 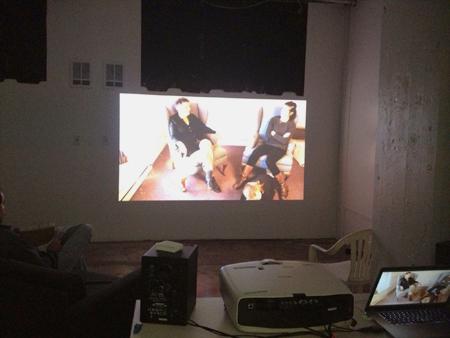 A fantastic public project in the street: 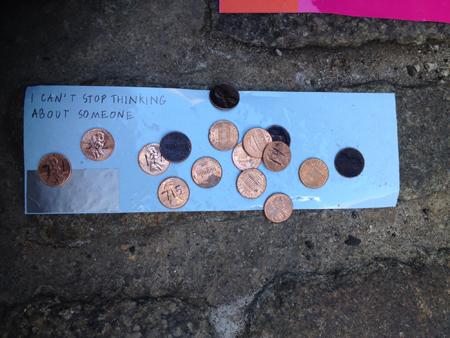 Saya Woolfalk in her studio: 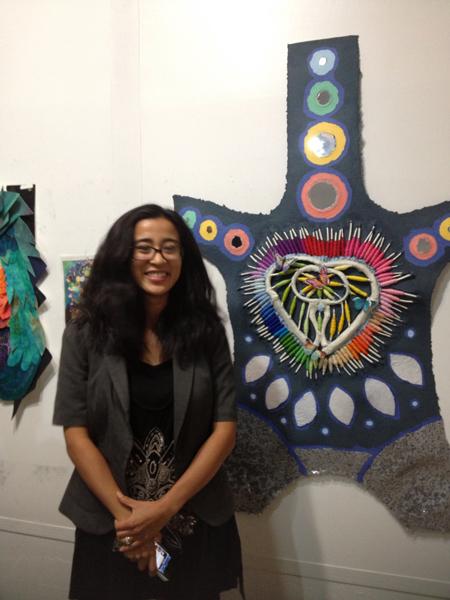 One of our favorite video + performance artists, Shana Moulton at Smack Mellon: 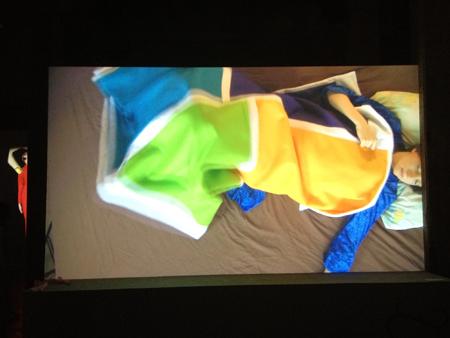 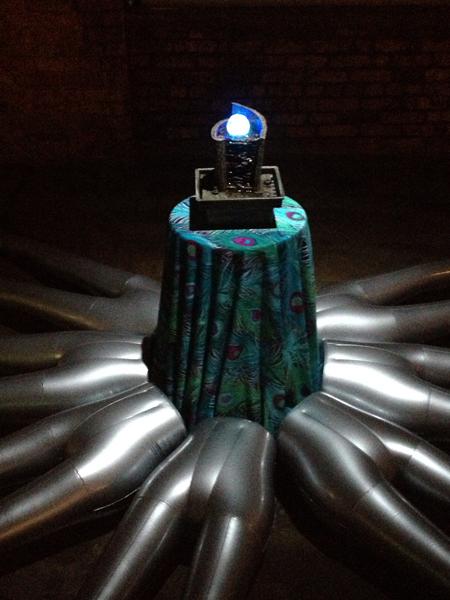 And finally, we would like to honor Matthew Deleget at Minus Space with the highly cherished Rob Carter Award for exceptional storage organization: 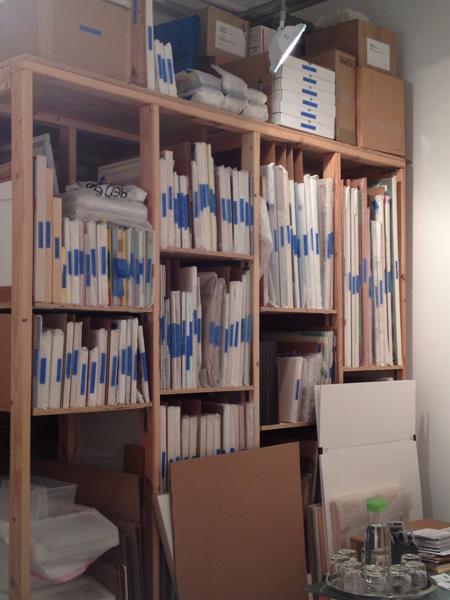 We were excited to receive a drop off of new sculptures from Mark Mulroney this afternoon at Mixed Greens: 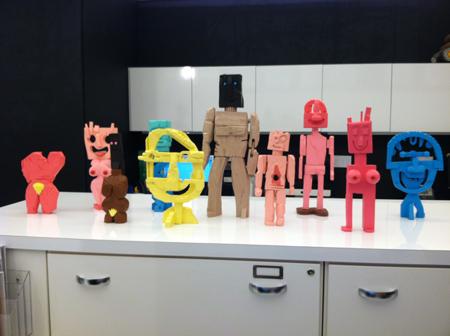 This colorful group will be featured at the Texas Contemporary in Houston, TX from October 10-13.

Mulroney talks about the uncanny, the beauty of a cheap joke, bodies and fluids, and cartoonish excess.

A very very special guest stopped by at Mixed Greens today!!
Pax, Monica's baby boy, slept, smiled, and did many other fun fun things with us. He even wore a matching shirt with Steven. 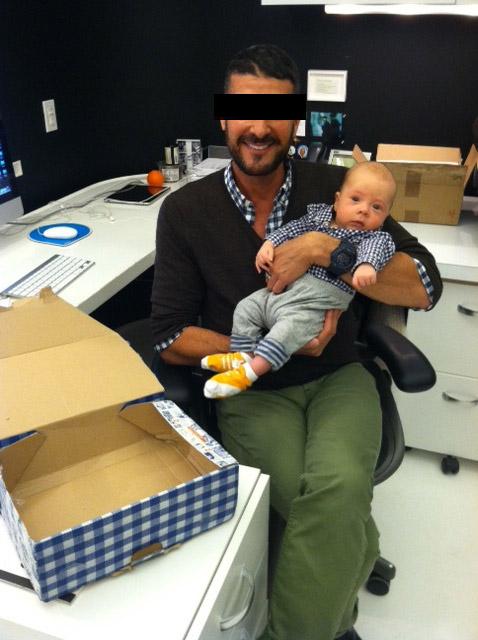 Several sights for sore eyes on a Monday afternoon:

Alycia from Jae Matthews on Vimeo.

Humanbeast—'Baluster' from Matthew Underwood on Vimeo. 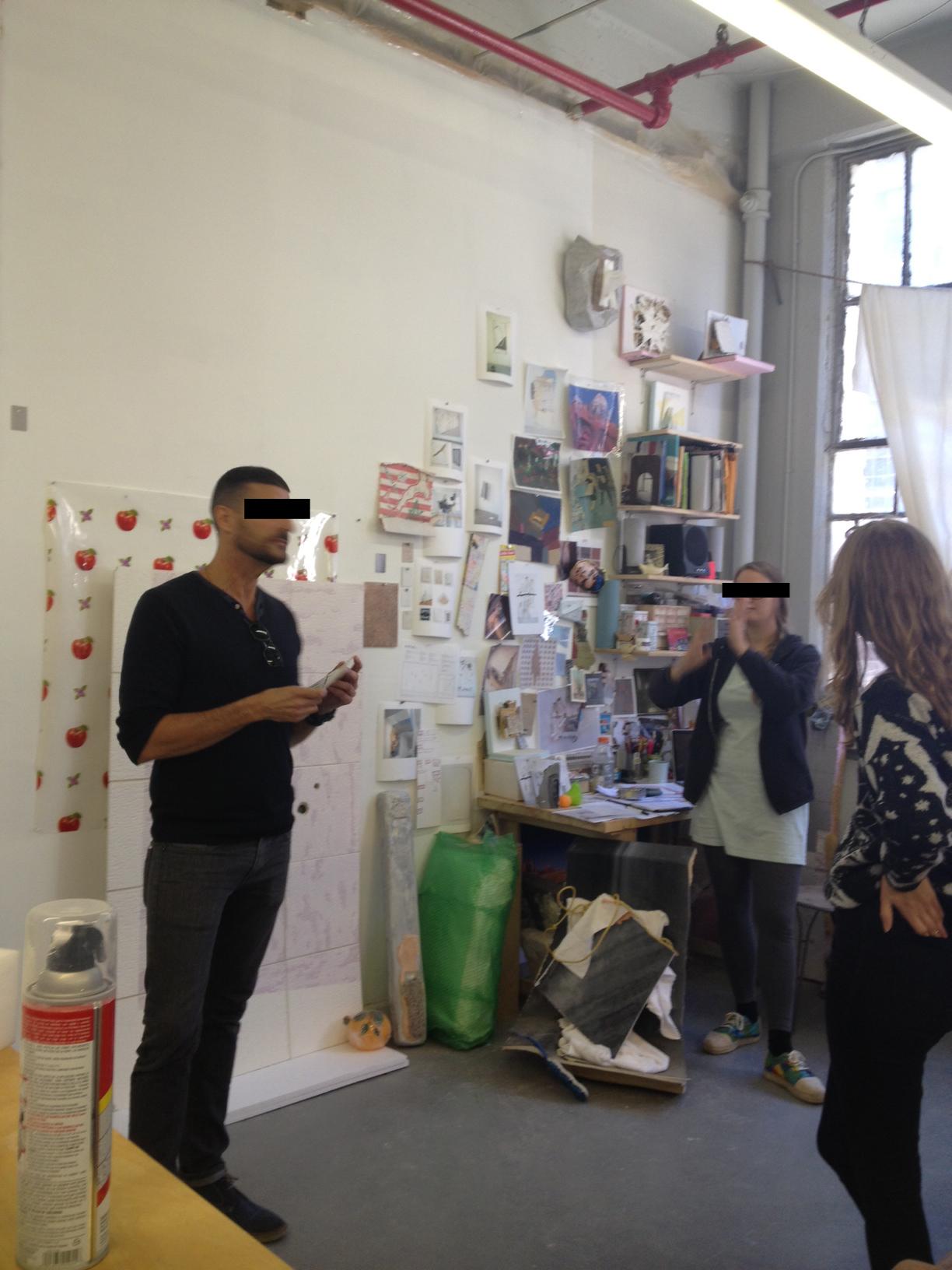 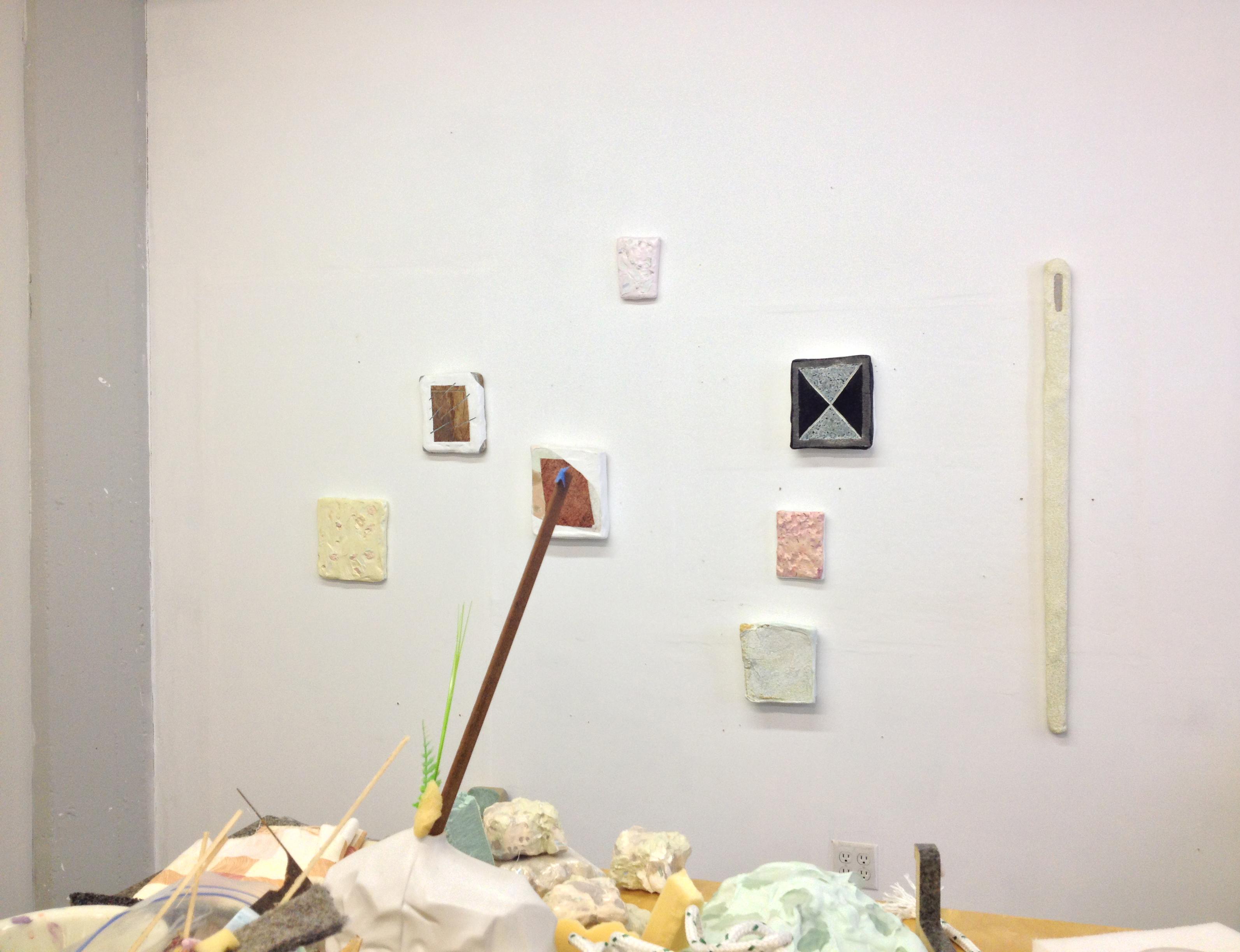 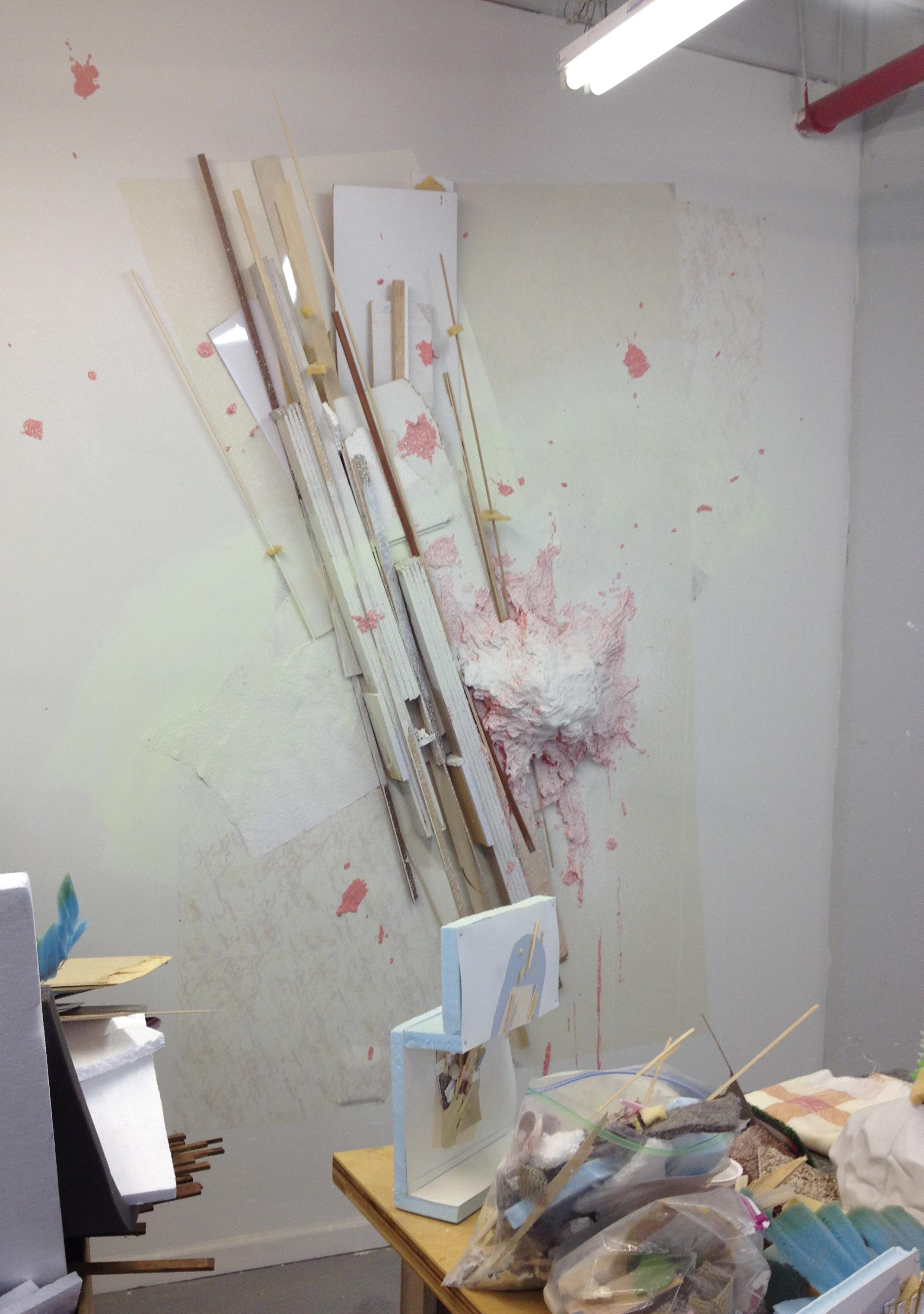 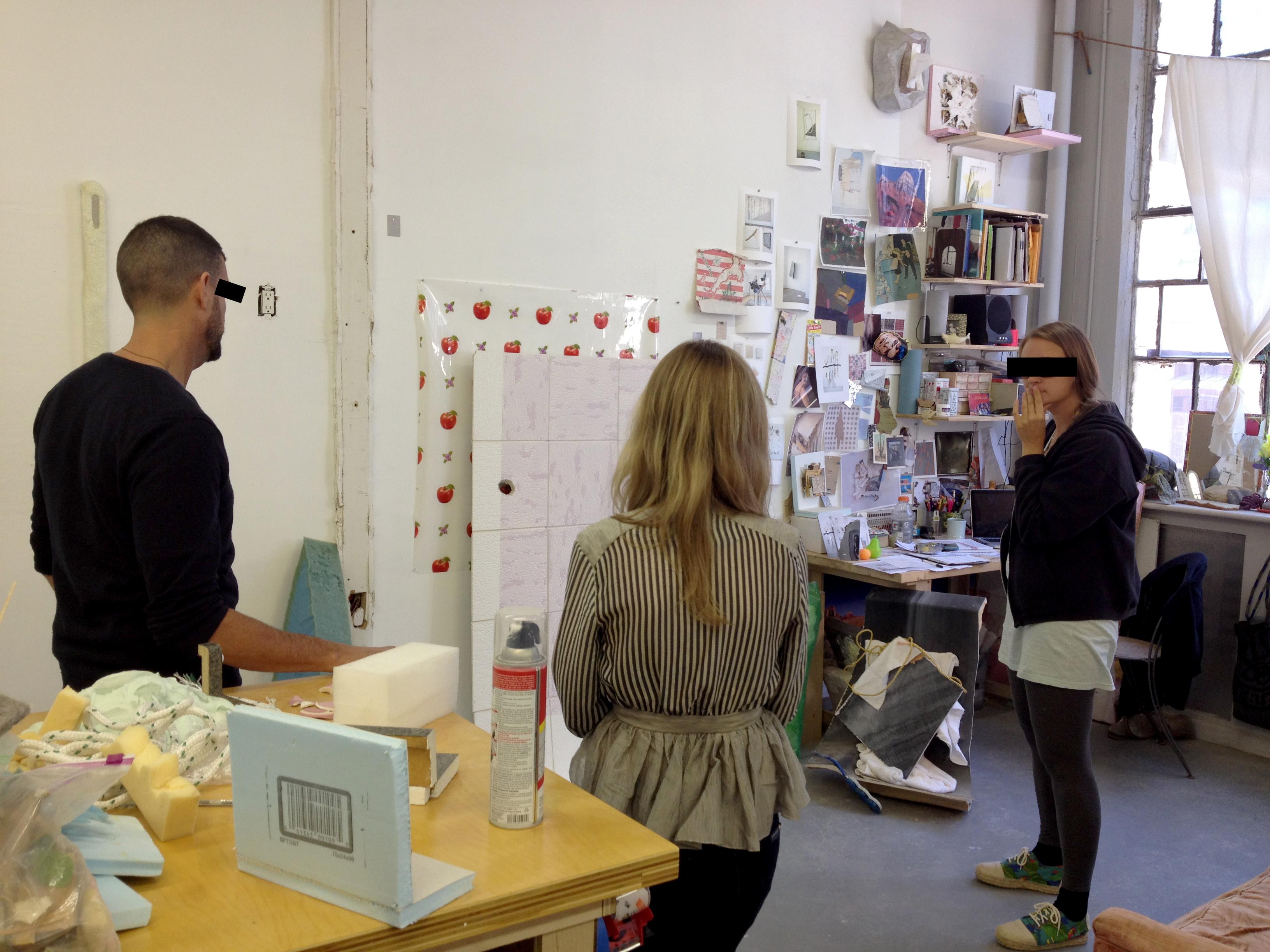 Heather, Steven, and I paid Katie Bell a visit at her Sunset Park studio this morning.

Be sure to look out for her work in our booth at:


Her work is currently on view in the group show Material at STOREFRONT Bushwick.

(P.S. Look forward to seeing much more of Katie Bell at Mixed Greens in 2014!)

Oh... and be sure to root for Heather's husband on Million Second Quiz tonight!
http://www.nbc.com/million-second-quiz/#/live_from_nyc
#MSQRishiB 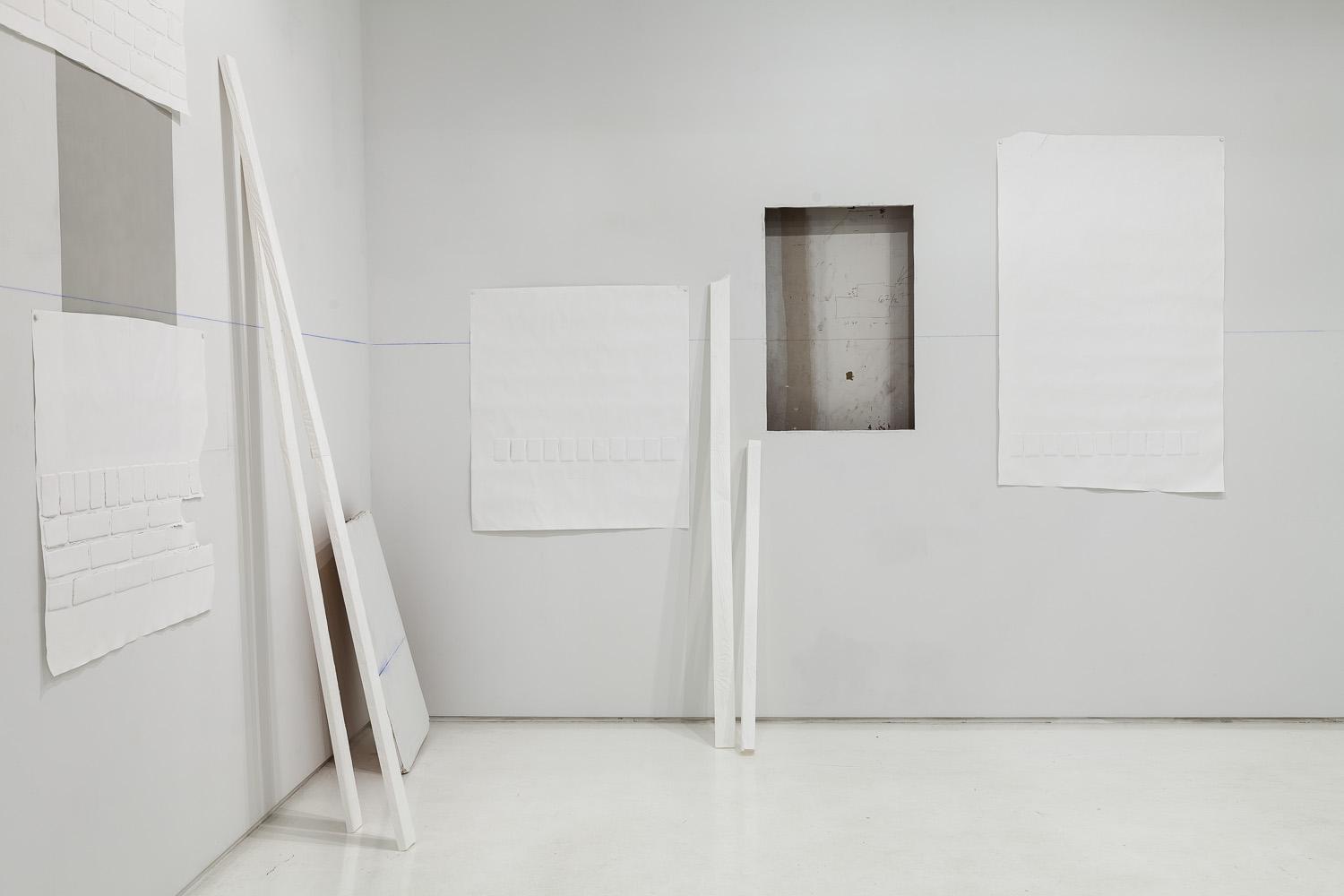 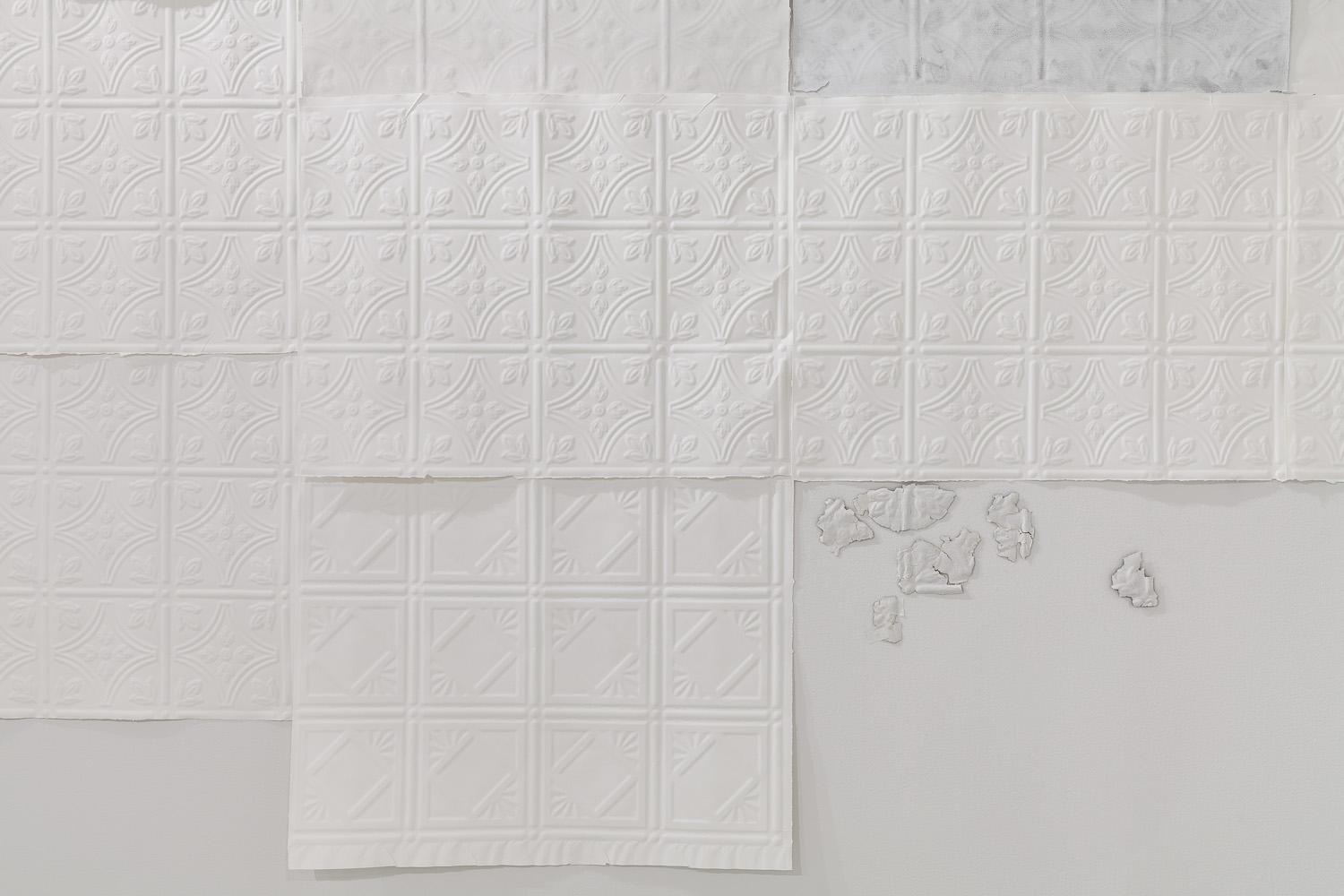 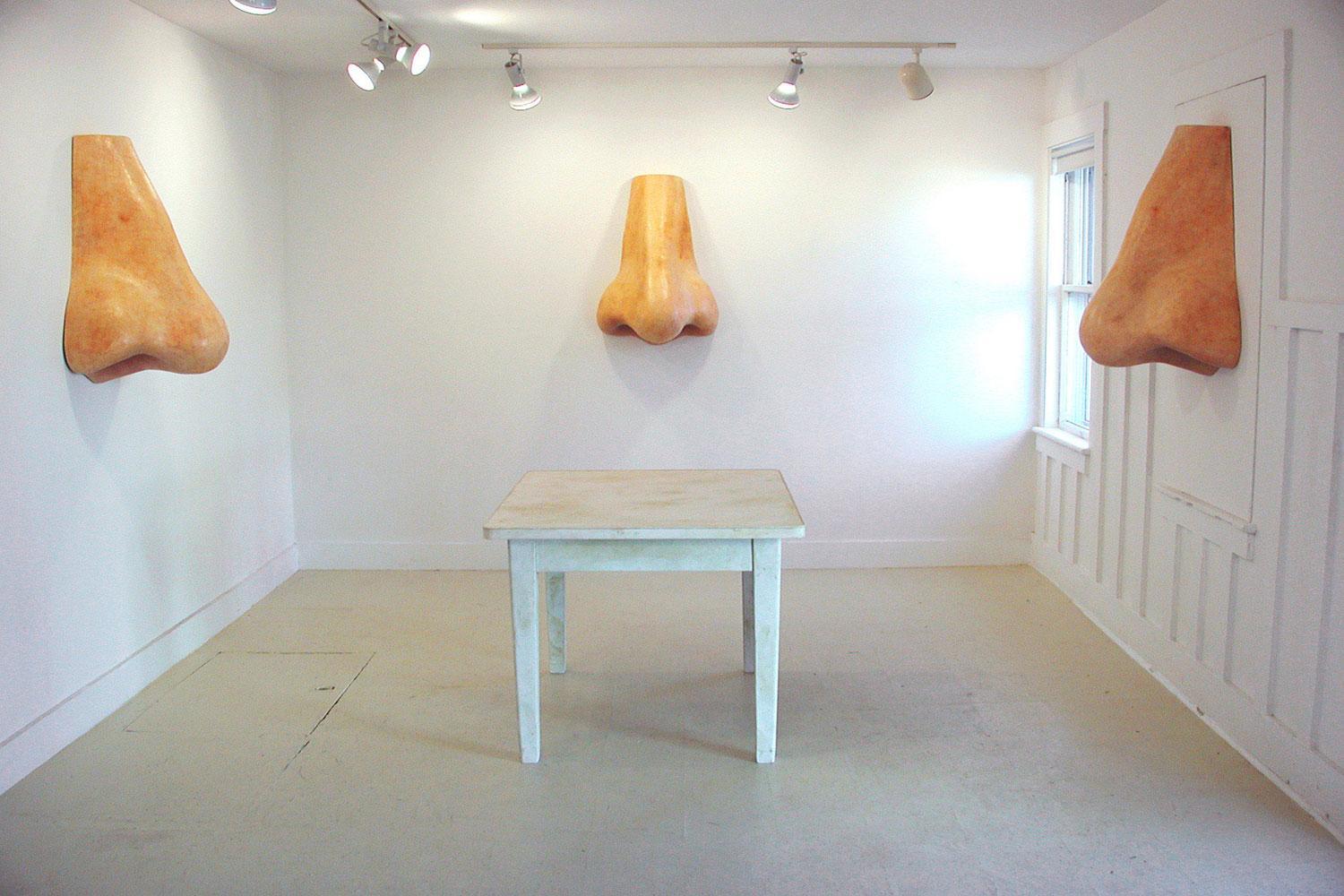 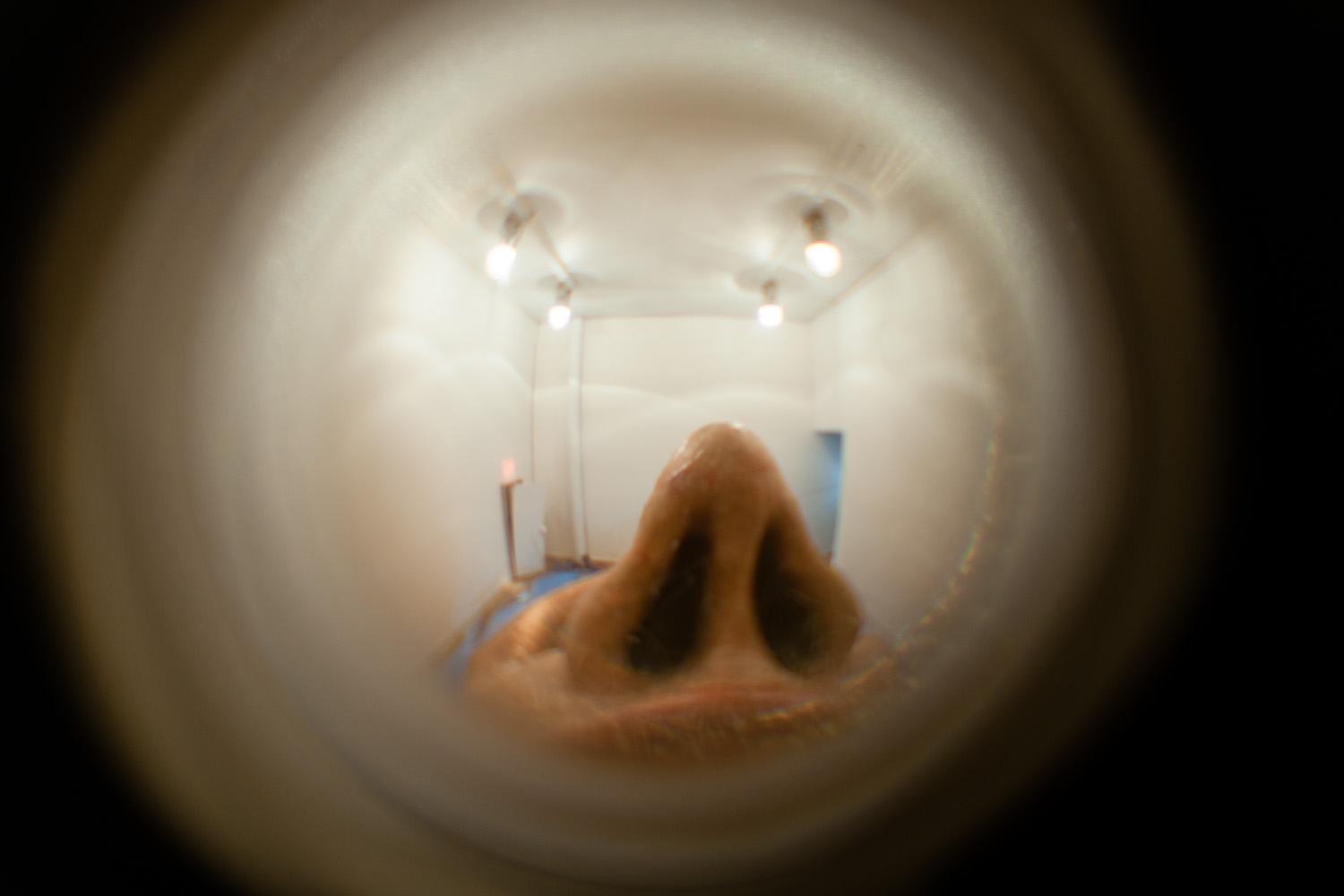 Projective City is pleased to announce Sense, an exhibition focused on a singular, surprising, large-scale sculptural work by Hans van Meeuwen. The piece was conceived in direct reference to the gallery’s architecture and the viewer’s gaze.

When van Meeuwen was a teenager in the Netherlands, peepshows were an exciting topic of conversation. He remembers a striptease dancer talking about how she had a good idea of who was behind the peephole. Van Meeuwen was struck by this admission, and thought about both the comfort in supposed anonymity as well as the rush of confrontation. For Sense, van Meeuwen utilizes the voyeuristic nature of Paris-Scope by forcing viewers at Mixed Greens to literally peep through a hole in the wall to view his sculpture.

For years, van Meeuwen has worked to create figurative sculptures of disembodied limbs (tree, human, and animal) that astonish the viewer with their location and scale. Sense is no different. Our perception, our comfort as viewers from a distance, and our own bodily experience are all questioned with a simple look through a tiny viewer.

Hans van Meeuwen was born in Rotterdam, the Netherlands, where he studied at the Royal Academy of Art and Design. In 1987, he was a finalist at the very prestigious Prix de Rome prize for emerging artists. Van Meeu- wen has shown extensively in Europe and the United States including solo exhibitions at Rheinisches Landesmuseum, Bonn, Germany; Kunsthalle Dominikanerkirche, Osnabrück, Germany; Kunstverein Baden-Baden, Germany; Galerie Deschler, Berlin, Germany; Lokaal 01, Antwerp, Belgium; Christinerose, NYC; Galerie Carla Stützer, Cologne, Germany; ADO Gallery, Antwerp, Belgium; and the Durst Organization in NYC. Residencies include the Fine Art Work Center in Provincetown, MA, and the Millay Colony for the Arts in Austerlitz, NY. His public art has appeared at the Arte Luise Kunsthotel in Berlin, and is on permanent installation in public spaces in Amsterdam, Leeuwarden, Huizen, and Zeist, all in the Netherlands. Van Meeuwen currently lives and works in Brooklyn, NY.

Courtney is off to San Francisco :(

This week has been an exciting one. Sonya Blesofsky is finishing her install, WonJung Choi installed her window installation, and the Paris-Scope to Hans van Meeuwen's show is up and ready to go. But it's also a sad time for us at MG... Courtney has moved to San Francisco. We will miss her greatly! Here's a screen shot of her on the staff page for posterity. Tear. 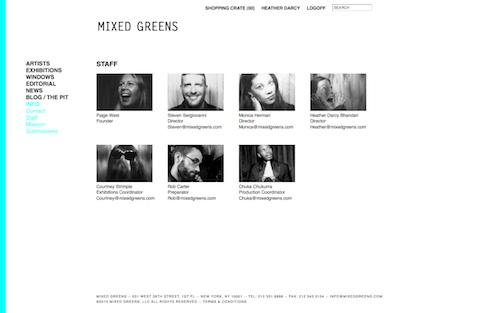 What I did on my summer vacation - the guessing game!

Last week, Mixed Greens was closed while Sonya and Rob installed. Guess where the rest of us went on our summer vacations!

One of us was in Portland (check out a friend in his Poler sleep sack) and made a visit to Howard Fonda's studio. 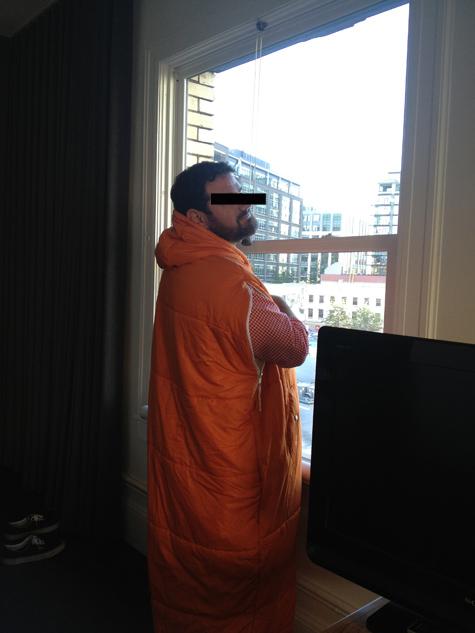 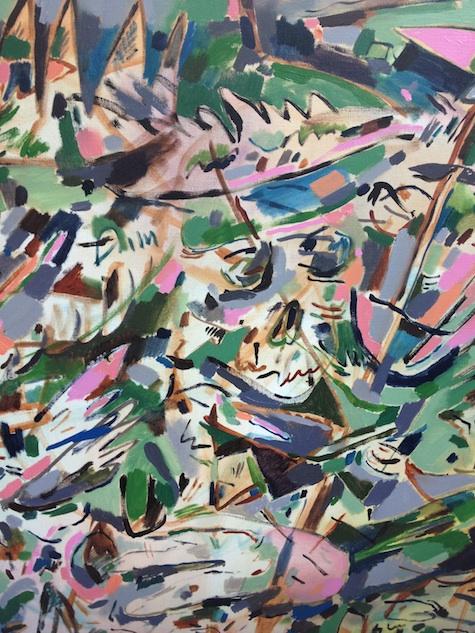 Another was rambling through Walter deMaria's Lightning Field, where he almost bumped into James Franco! 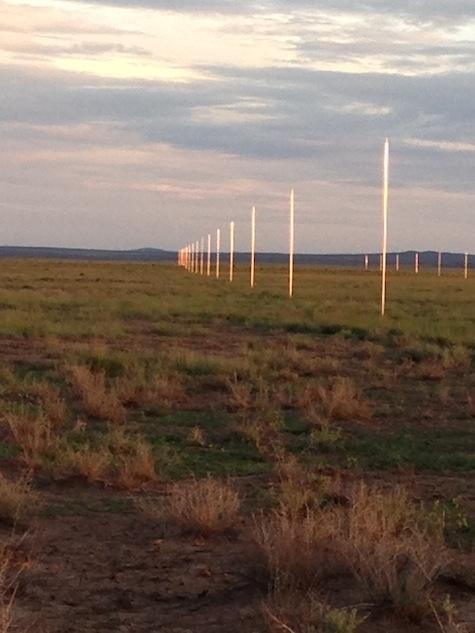 And one was predicting the weather on the Florida coast! 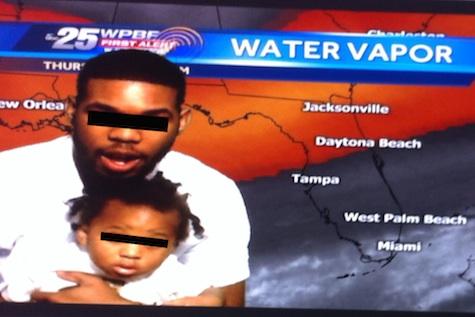