Freight+Volume current group show, The Decline And Fall Of The Art World, Part 1: The One-Percenters, is interactive and makes a point of relieving issues with today's art world. Karen Finley's piece "The Complaint Booth" allows visitors to share their personal complaints with the art world. Though the responses varied some trending complaints were...
-- art not being accessible for everyone
-- interactive art is very relevant yet very rare.
-- art being exhibited only because it is "art", loss of craft and integrity.

To add to the debates and complaints, the show is up until August 17th just two streets away from us!
And if you too are frustrated by the lack of interactive art around come to Murmurs & Incantations an immersive theater piece Mixed Greens is hosting August 21st and 22nd! 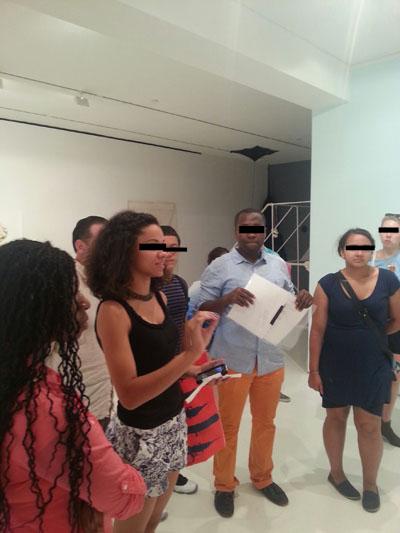 Since Oasa DuVerney received her MFA from Hunter College in 2011 her work has primarily consisted of video performance as well as graphite drawings on paper. Her piece, Fidel 638 Times is currently installed in our group show: Crossing the Line, Contemporary Drawing and Artistic Processes. The piece is a series of 638 cropped portraits, each graphite on paper, and all done from a single photograph of Castro. Oasa found this image from an article about the many unsuccessful assassination attempts the US made against Castro.
Throughout her work, Oasa means to portray societies collective aggression often through the display of consumerist culture. With this piece she was interested in the large number of failed assassination attempts paired with the obsessive amount of drawings. 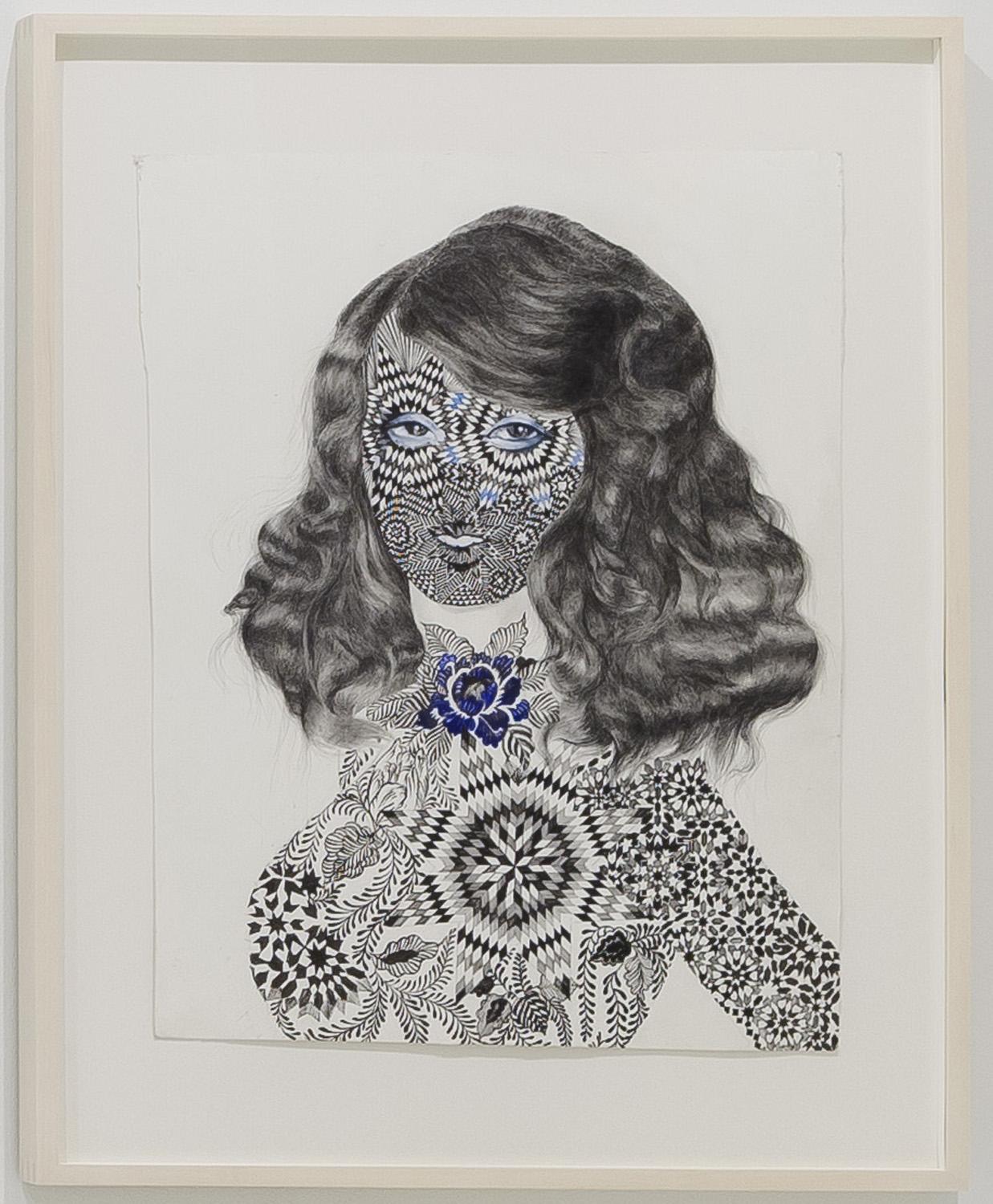 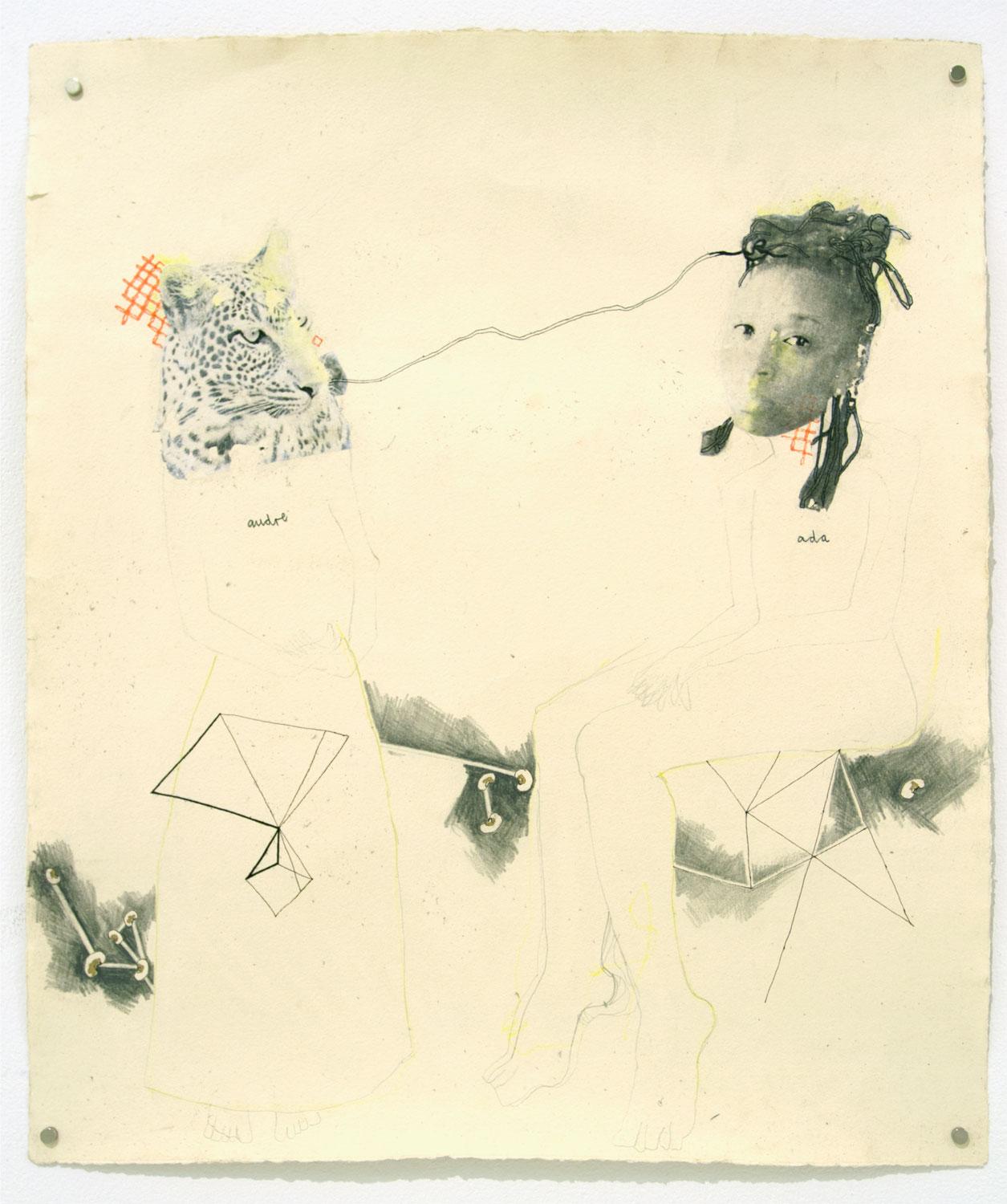 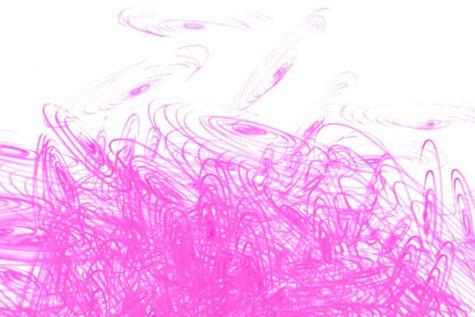 It is that time of year again, inventory week! While you might think all of that re-recording is tedious, we discovered some stored treasures like Mary Temple's 1 Million Ellipses. where she used neon and white pens to create 1 million circles on each drawing.

Check out her website to see her more current work and come to Mixed Greens to see the light installation hanging above our desk. 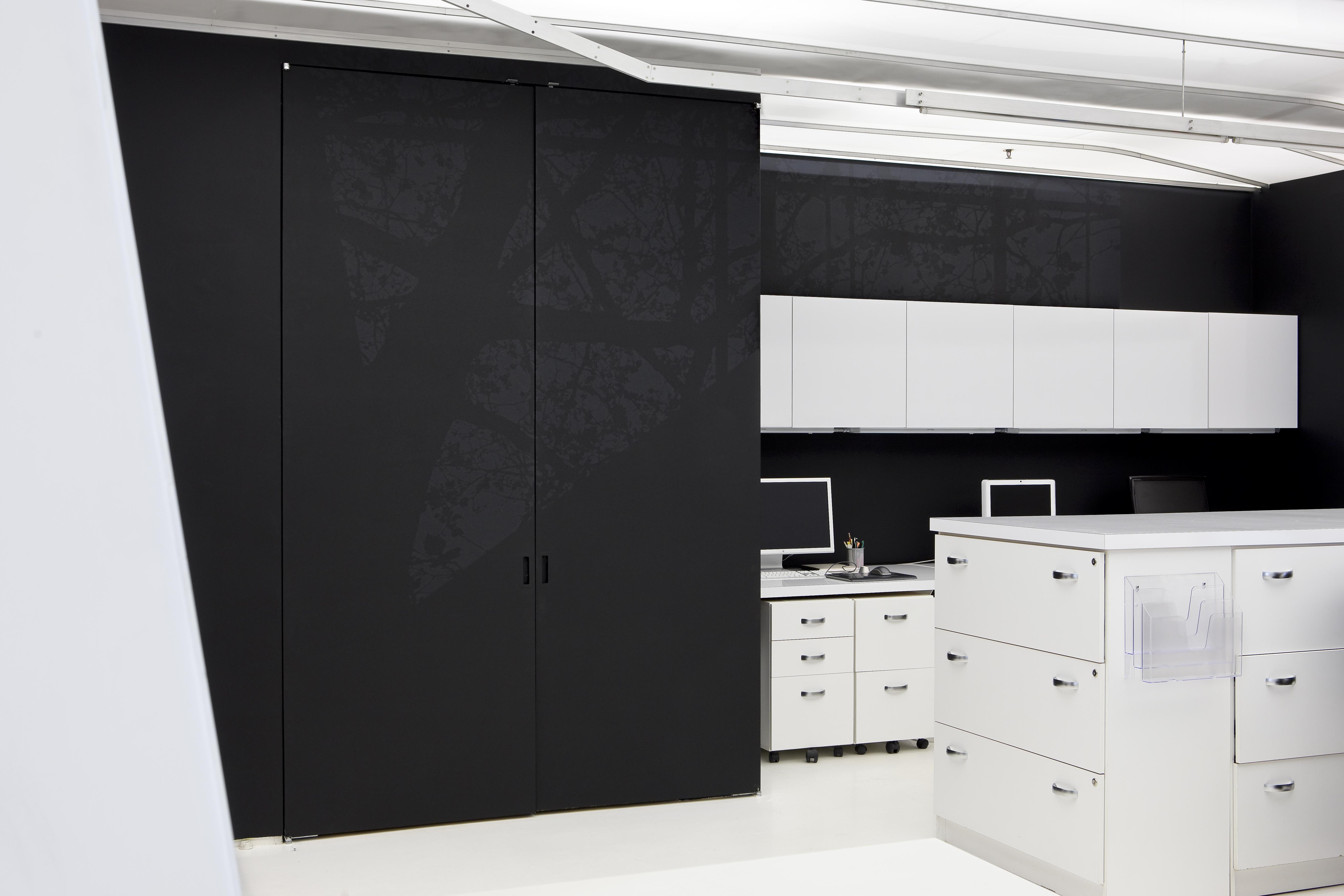 In anticipation of SHARK WEEK.

Lee Stoetzel is all over the internet today. Check out postings about his sculpture here (@Trendhunter) and here (@BeautifulDecay).

Larry Ossei-Mensah, one of the curators of our current exhibition Crossing the Line will be on the radio today. Listen to him here, at 5pm, at BBOX Radio!

And if you're in Los Angeles, mark your calendars for the opening of Sweat Baby Sweat (featuring work by our very own Mark Mulroney) hosted by GILDAR Gallery in their summer Pop Up space at 7466 Beverly Blvd #7 Los Angeles, CA 90036. Opens July 21st. 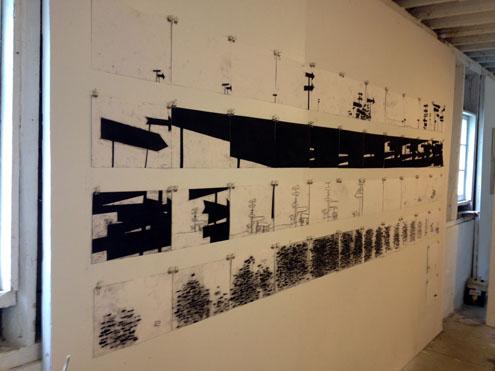 Heather and Steven were upstate today to visit Kim Beck at Art Omi!

Cameron Gray a Block Away

Cameron Gray’s most recent exhibition, Birth of a Legend at Mike Weiss reflects the instant, overwhelming and excessive nature of today’s culture. Pop images blink out of sync while fake fast food is strewn about. Gray’s reference to our world of internet addicts and media maniacs is countered with mainly retro imagery with a low-tech vibe.
The show is up until August 17th and if you like it be sure to check out these net artists: Petra Cortright, Rollin Leonard, and Nick V. DeMarco 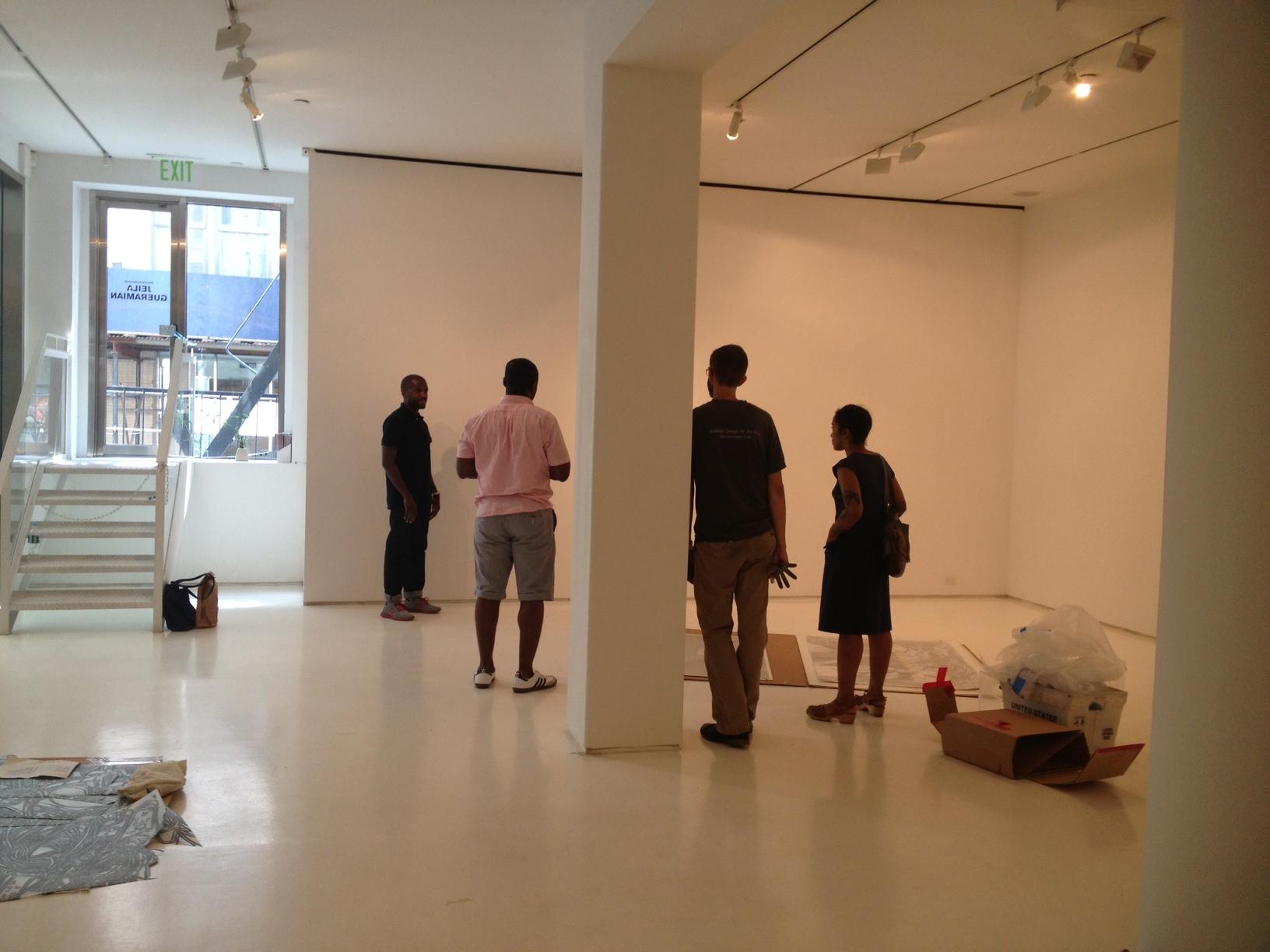 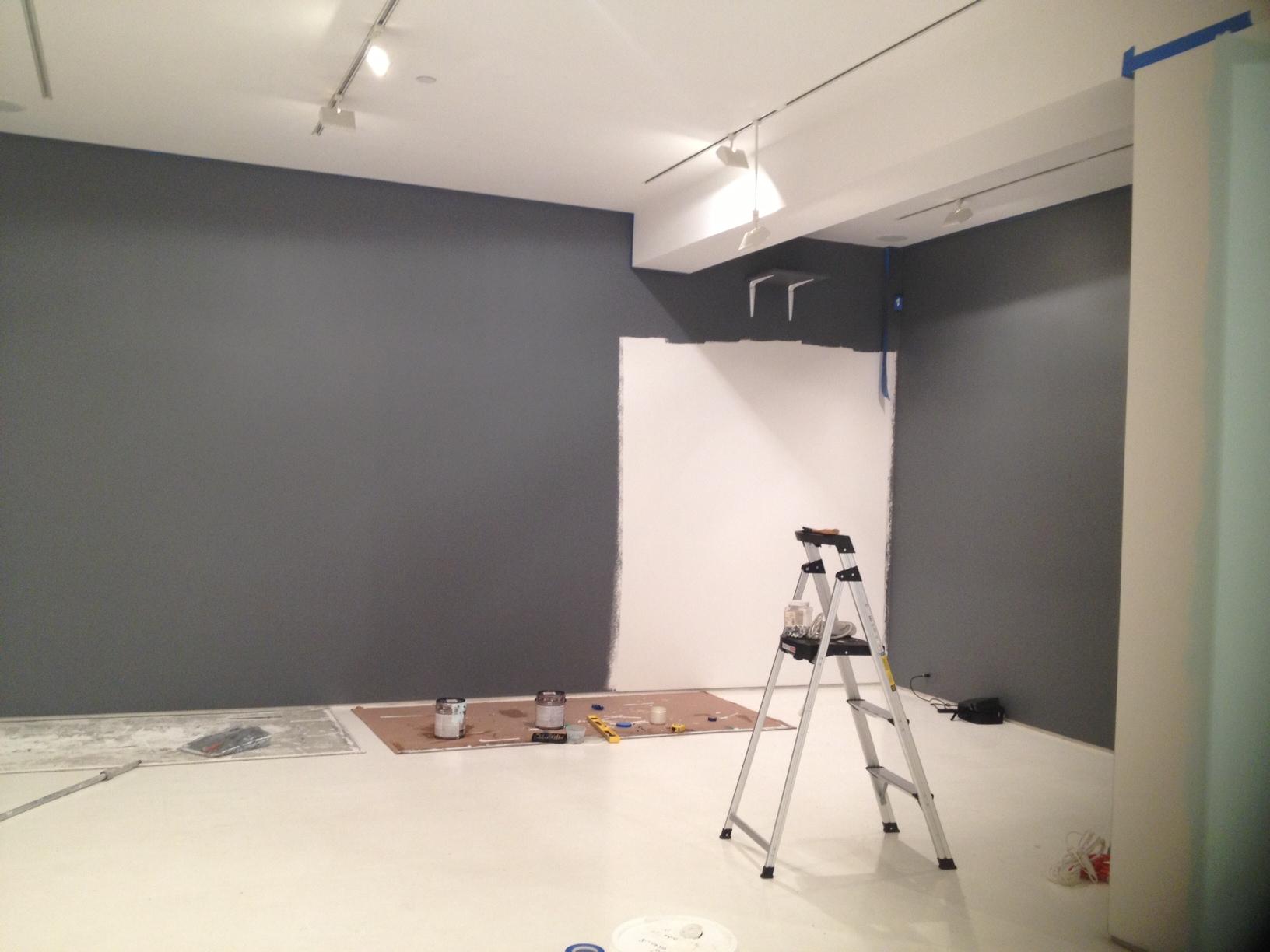 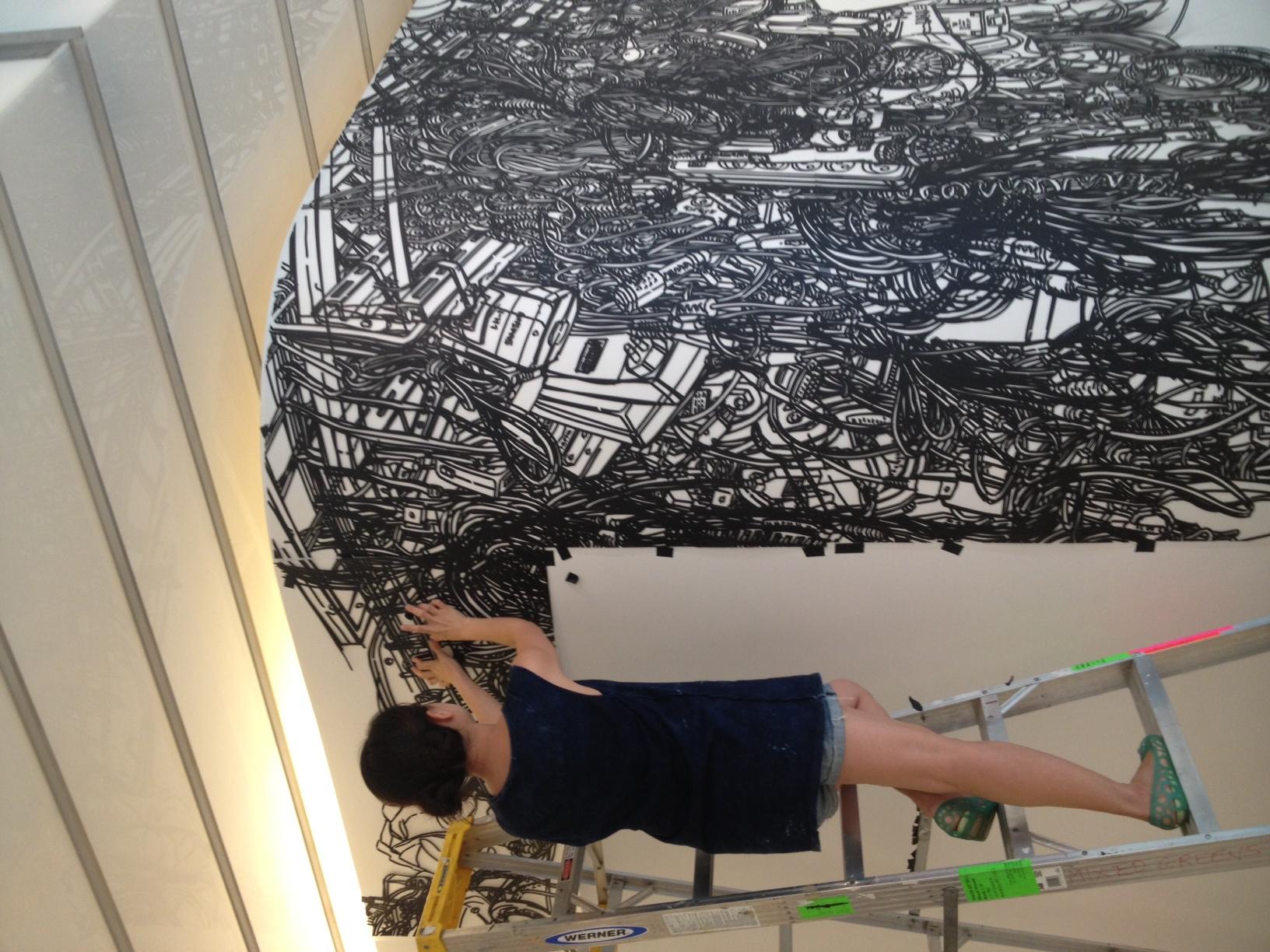 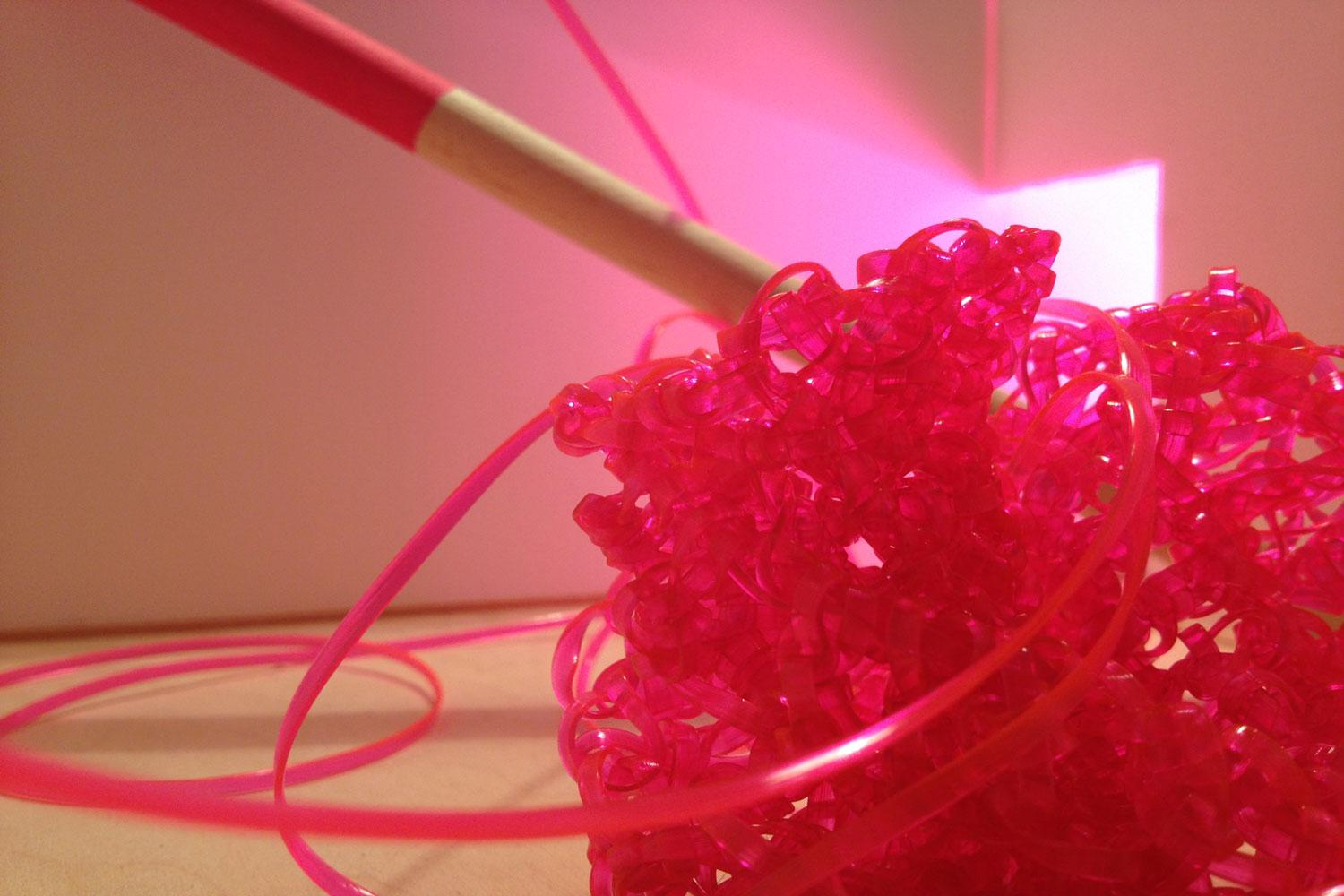 Projective City is pleased to announce {RE.SIDE...} yet again, an exhibition of new, large-scale sculptural works by artist Sanam Enayati. Enayati’s installation for Paris-Scope is in conjunction with the exhibition Crossing the Line: Contemporary Drawing and Artistic Process, curated by Larry Ossei- Mensah and Dexter Wimberly, on view at Mixed Greens Gallery in New York City. In addition to this being Enayati’s first exhibition with Projective City, this is also the first time Paris-Scope has been included as part of an exhibition at a separate location.

{RE.SIDE...} yet again fills the gallery space with an oversized, knitted sculpture and precariously large knitting needle, all washed in pink light. The interlaced mass references mark making and traditionally drawn imagery through Enayati’s use of thread and filament.

While in her studio, Enayati identifies one emotion, such as anger or love, and lets it transform and overlap with other emotions as she performs a series of “feminine” and “domestic” processes, repetitive movements, and obsessive behaviors meant to create a new, non-familiar space/reality. By repeating the motion required for knitting, for instance, Enayati investigates the physicality of basic human feeling. When the work is later installed in the gallery, the carefully controlled atmosphere and placement creates a simultaneously warm and anxious experience for the visitor, and serves as a document of what took place in the studio.

Sanam Enayati was born in the United States and raised in Tehran, Iran. She holds a BFA from the Illinois Institute of Art in Chicago, IL, an MFA from the School of Visual Arts in NYC, and a Masters of Fashion Design focused on sociology and psychology from Istituto Marangoni in Milan, Italy. She currently lives and works in Brooklyn, NY.