Submissions--we'll get back to you shortly 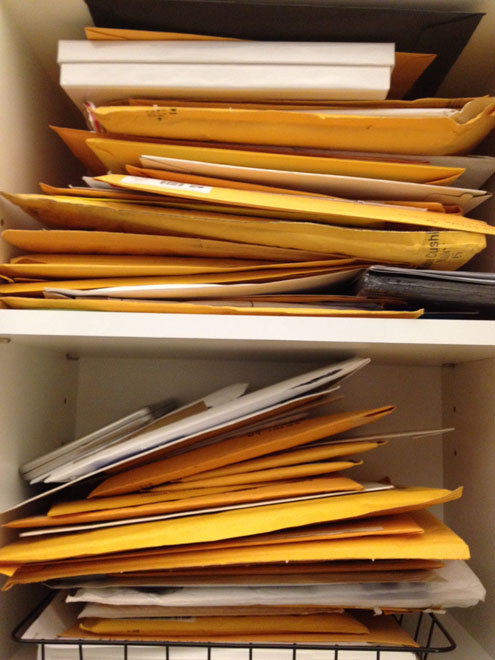 This is just one of many cabinets overflowing with submissions. If you submitted to us by our January 31st deadline, we'll be reviewing the packets over the next two weeks, and you should begin to hear back from us by early March!

Thanks for your patience! 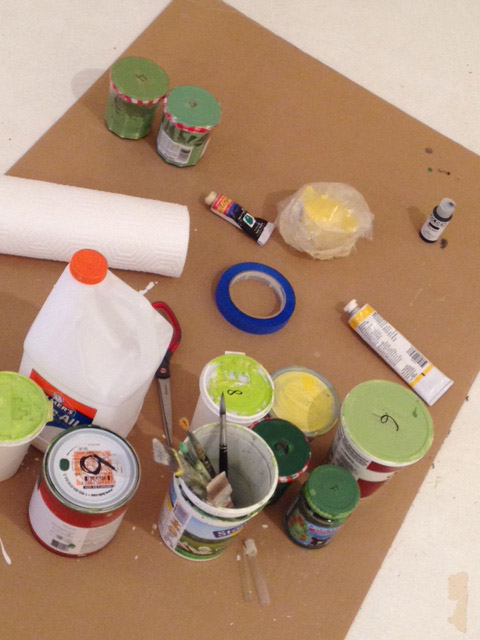 Mark must be in town! 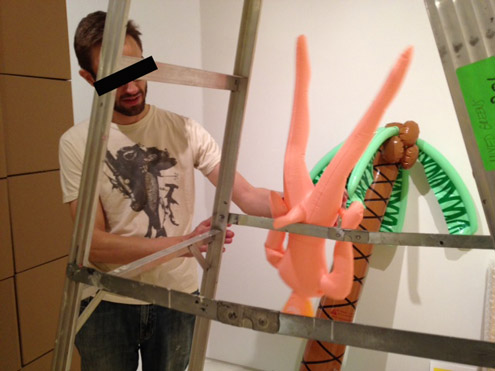 Installation is ongoing...and the blow-up dolls are getting the better of us. 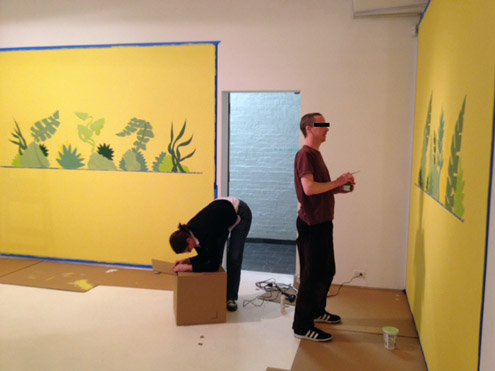 Mark Mulroney, with the help of his excellent assistant Lucy, is working on his murals for the opening of his solo exhibition this Wednesday at Mixed Greens. 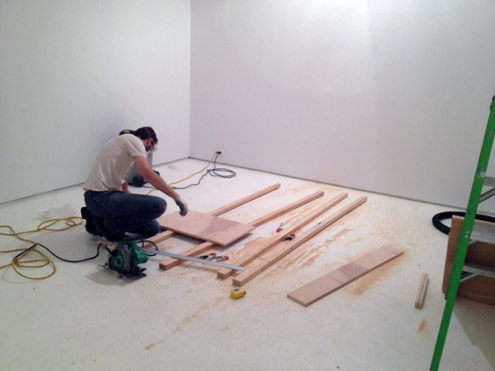 And Rob's in the back gallery sawing the heck out of some 2x4's for our upcoming VOLTA booth. 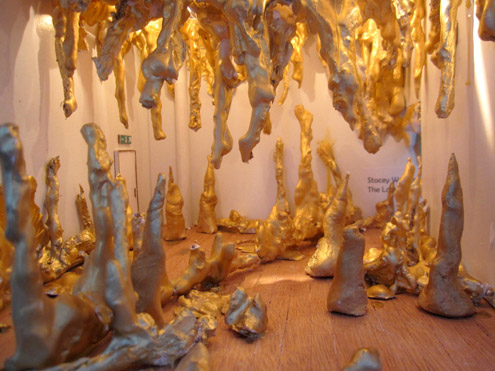 Mixed Greens is thrilled to present the next installment of Paris-Scope, viewable through a peephole in the back gallery. There, viewers will encounter Stacey Watson’s astonishing, near-impossible transformation of the Projective City gallery space.
Golden stalactites hang from the roof of a glowing grotto, reaching ever so ponderously, impossibly, slowly to meet their stalagmite counterparts. The stalagmites are, in turn, formed by the preposterous labor of billions of water droplets, drizzling down the stalactites and falling to the cavern floor. With each drip, micro-milligrams of golden limestone accumulate to form perilous towers, stretching up to touch their creators and eventually joining them in a single column. The grotto itself is no longer a mere cave, but has been gilded and transformed through human activity for undisclosed ends. What rituals or obscure cosmic rites were performed in this transmogrified gloom? What are we to make of the mysterious axe? Against the backdrop of a gargantuan timescale, the scene suggests wealth, ambition, and opulence, but also gloom, doom, and decay.

Citing a range of source material for inspiration (the elaborate maquettes found in the Garnier Opera House in Paris, the tinfoil grandeur of the Ladurée macaroon shop in London, the unfinished Crystal Grotto in Surrey’s Painshill Park, and the Rocky Mountains of her native Canada), Watson has gooped, dripped, and oozed her sloppy materials all over the Projective City gallery, transforming the main exhibition space into an epic faux grotto. The cave is golden, luxurious, and rich, but it is a shabby luxury—a deliberately staged elegance at once natural and artificial, ceremonial and banal. Watson’s use of everyday materials (even in large quantities) evokes the pleasure of artistic play, and her light handling of complex themes generates an atmosphere at once solemn and absurd.

Watson has been shown in solo and group exhibitions in London, Paris, Berlin, Toronto and her native Calgary, where she is also the head curator at Pith Gallery. Her admittedly “ham-fisted,” playful approach to materials is unapologetically demanding of her viewers, who are invited to stretch their imaginations to meet hers, perhaps not unlike the stalactites and stalagmites in her current installation.

Paris-Scope is curated by Projective City.

What is James Franco thinking? 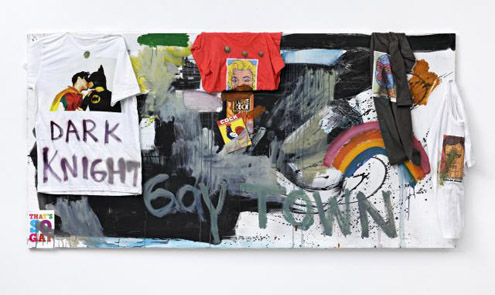 I'm worried about you. I just got the email from Peres Projects about your upcoming solo exhibition entitled Gay Town. The accompanying image (above) was troubling. For a variety of reasons. First of all, "Gay Town"? It looks like a junk pile of stereotypical ephemera: Rainbows and bumper stickers--check. A bunch of t-shirts tacked on the surface (presumably from "gay town")???--check. Batman & Robin?!?!?!?! Seriously?
I wonder where the dialog even begins with this work. Is there a dialog? Or is it just insensitive and a little bit ignorant? Hope you have more to say about this show.

In other news, can't wait to see Spring Breakers.

READ MORE | COMMENTS: 0
Color Shift is in its last days. Be sure to stop by and check it on on or before Saturday, February 9th! 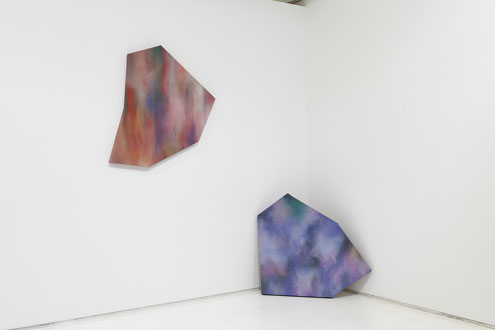 above: Kate Steciw's works on canvas. 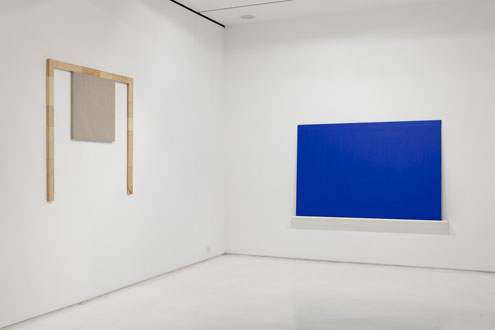 above: Arabella Campbell's We have pictures because we have walls., 2011, and Sherwin Tibayan's Installation View #2 (MOMA, Blue Monochrome, 1961, Yves Klein, 2013 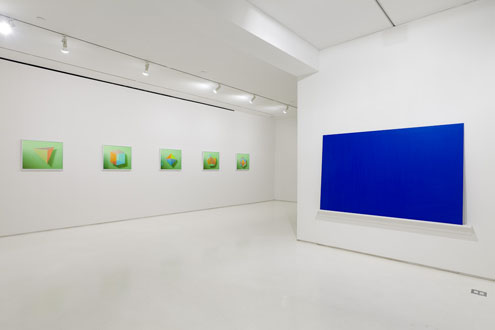 above: Zachary Dean Norman's archival pigment prints are in the background.

Coke O'Neal in the news! 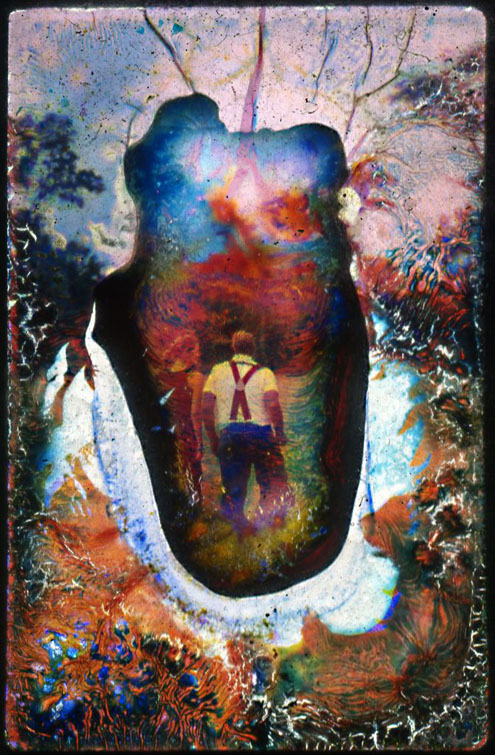 Read this article about artists' responses to Superstorm Sandy--including Coke Wisdom O'Neal's new body of work to be featured in an upcoming solo exhibition at Mixed Greens, opening March 21st! 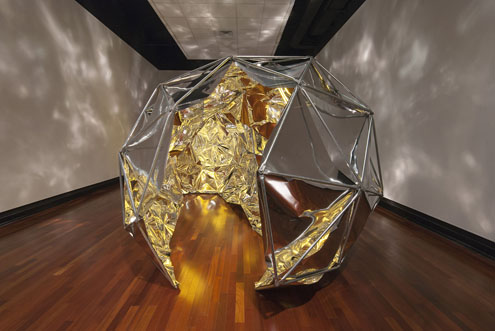 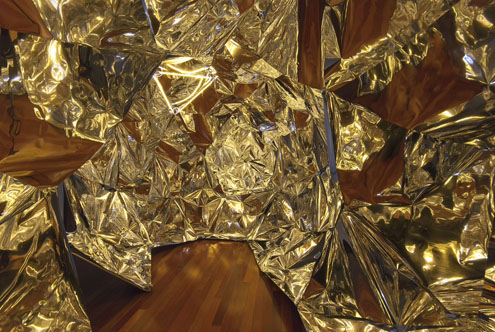 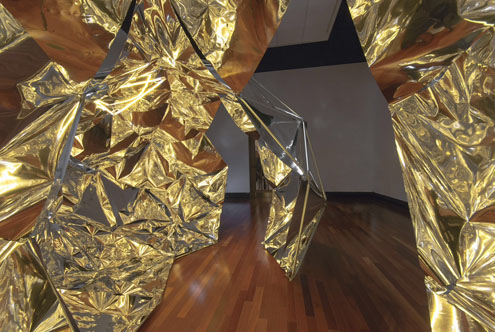 Heather was up in Providence last Friday, and she got to check out Keith Lemley's work in person. Be sure to check out his show, Dreams of an Ideal, at the Smith Center for the Arts at Providence College. Artscope, the New England publication, has a lovely bit on Keith and his work here.