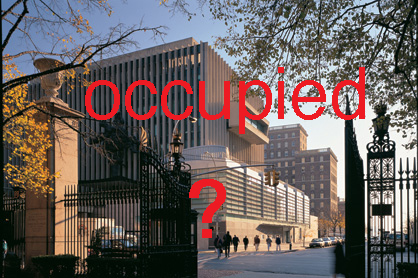 I would like to point out to the Occupiers of Artists Space that the Space's upcoming exhibition, Identity, is the ultimate example of an exhibition dedicated to examining current institutional brand strategy -- a rather experimental type of exhibit developed by a rather fringe entity (Dexter Sinister), in a space that is free and open to the public. Talk about questioning/exposing some political and economic truths about art institutions!

Its a real shame the Occupiers didn't familiarize themselves with the exhibition program before their little stunt. And to be clear, Identity is two years in the making--this is not being installed as a result of the 28 hour occupation. 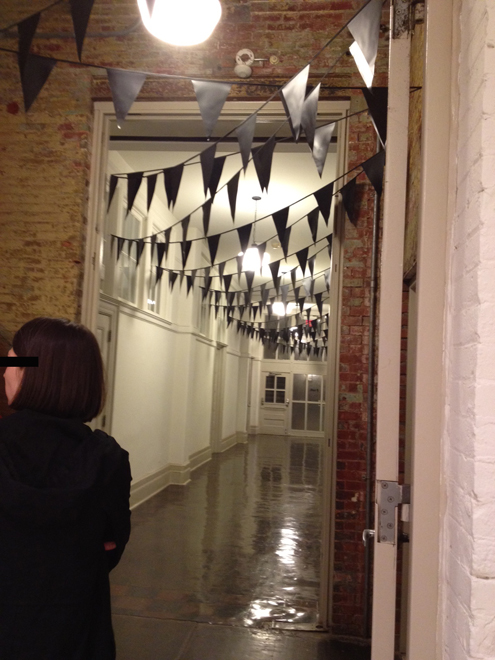 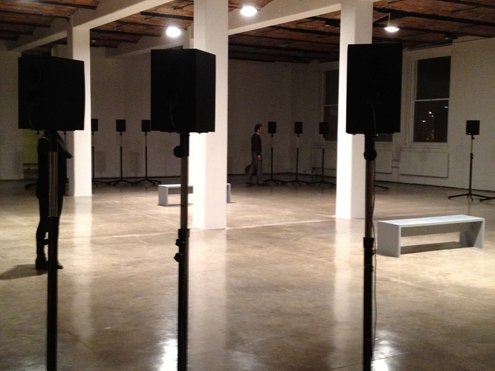 HDB and CS went on a LIC adventure last night to PS1 for a walkthrough of the current exhibit, September 11, with curator Peter Eleey.

I found a nice discussion of the show here. 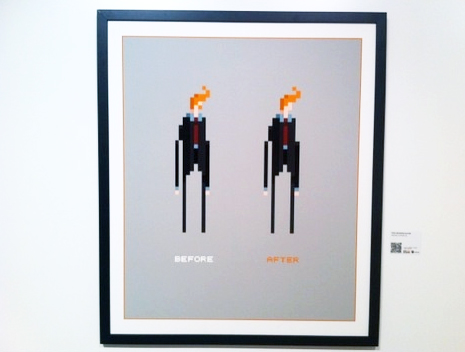 First there was the Non-Visible Museum of Art (James Franco's pet project), and then there was Pippin Barr's virtual MoMA showing The Artist is Present.

Clear your schedules because the latest is MoCA, or the Museum of Conan Art. Yes, a museum dedicated to artwork by Conan O'Brien's ardent fans. It will exist/be on view at the Time Warner Center through November 3rd. More info here.

Occupy goes off its rocker and other Monday musings

Artists Space was OCCUPIED yesterday. I'm still confused as to why its institutional usage was ever questioned. This is an enduring non-profit that has seemingly always been supportive of artists and has pushed boundaries with regards to their exhibitions. Most recently they exhibited the fantastic Christopher D'Arcangelo "Anarchism Without Adjectives".

The occupiers' blog, Take Artists Space, claims that Artists Space "pull[ed] their program out of a pure irrelevancy of New York non-profit programming". I strongly disagree. I believe the thoughtful D'Arcangelo exhibition is a strong argument against the occupiers' statement.

More on this (pretty lame) OCCUPY occurrence over at Art Fag City and Artinfo.

In other OY news:

The Guggenheim Abu Dhabi is on hold. (surprise, surprise)

Marcus Keely of the START Gallery at Wake Forest University has a great interview with alum Rudy Shepherd here. 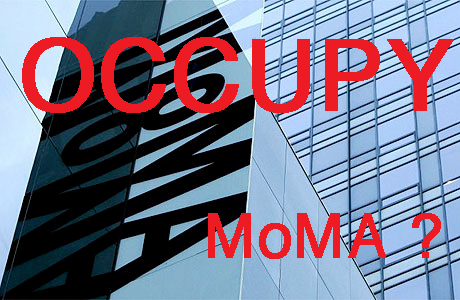 Without divulging my thoughts on the "Occupy" movement as a whole, I'd like to address the issues raised by the branch-movement, Occupy MoMA (and Occupy the New Museum). Artinfo touched on their points here, and I'll reiterate:

1. One chant was, "The Occupy Wall Street Movement will bring forth an era of new art, true experimentation outside the narrow parameters set by the market."

Let's take a closer look at these two issues. #1 seems out of touch to me. Is the market hindering the production of experimental art? I think in the past few years we've seen an emergence of art that some might tag as truly un-saleable. For example, internet based art (see Breanne Trammell), App-based art (see Rafaël Rozendaal), and the holy grail of the un-collectable: Tino Sehgal. If you purchase a Sehgal, the only "documentation" you receive in terms of explaining the piece is word-of-mouth instructions. Yep. MoMA just added a performance of his to their collection. So, how exactly is the market setting parameters?

#2 is a complaint I've often had, but then again, there are always free or reduced options. So why complain? If it bothers you that much, then head over to the Met and pay-as-you-wish. Most NYC museums this year had record numbers...so the high prices don't seem to be deterring many people.

For more on this topic, read this great piece by Ed Winkleman over at ArtWorldSalon.

No More Warhols. They're done.

The Andy Warhold Foundation is dissolving its authentication board.

Soooo....my question is, does this mean that Mr. Simon and the other people who have spent years trying get their Warhols authenticated can now call their works Warhols? OR, is it the opposite? Will there be NO more Warhols recognized from here on out???

Hoping to see some exciting new work, and I was in luck! A wide array of paintings, photographs, and sculptures captivated me.

Trudy Benson: Actual/Virtual at Mike Weiss Gallery included brightly colored, dense, and textured paintings. This is definitely a must see! 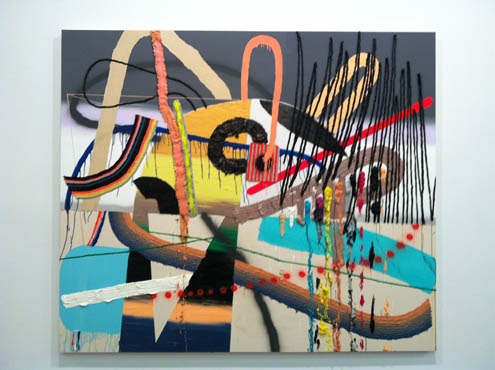 Kim Beck's Opening (in case you missed it)

Special thanks to ODelle Abney for once again visiting our opening reception and posting a nice video of the scene to Youtube. You can enjoy this pleasant walk-through of the show, even if you missed visiting us last Thursday night. Enjoy! 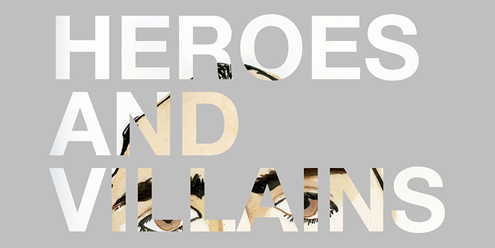 Art Fag City reviews Work of Art. "It spoke to me." "What did it say?"

Gallery Girls was here last night filming. Here's a description of the show I found online: "Gallery Girls is a docu-series following the lives of six young, 20-something women that work in New York City’s hippest art galleries. By day they juggle the stresses of their demanding bosses, maneuver through the complicated world they find themselves in and struggle to figure out how to get ahead in a business with so few opportunities to rise up the ranks. By night they are out at the hippest clubs, bars and art scene functions as they juggle their personal friendships, romantic relationships and art world acquaintances. For all these girls, their love for NYC is unwavering but their footing in the art world is anything but solid. Is this what they really want? Will they be able to survive in this business?" AHHHHH!!! WILL THEY SURVIVE IN THIS BUSINESS?? AHHH?!?!?!?!?!?!! (one of the girls had a fur collar on her jacket, so at the very least she'll survive the winter.)

And a rundown on my Pacific Standard Time experience....coming soon

reading today (couldn't pass this up)

1. It helps him get out of the house.
2. He enjoys the food on set.
3. He's interested in observing how these types of shows get made.

NYMAG, you are killing it today. Loving the headlines. 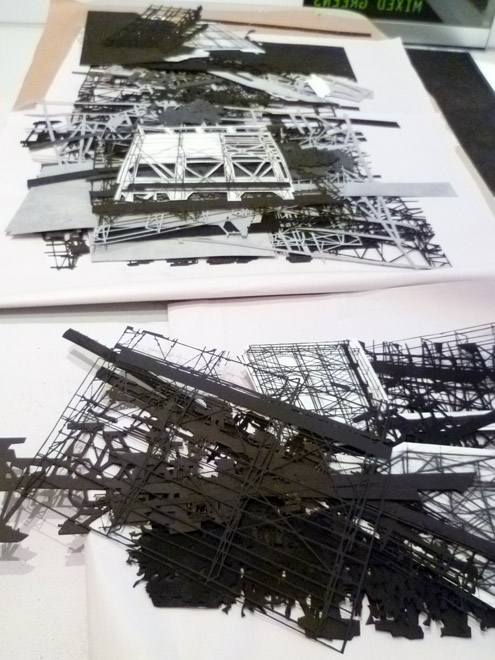 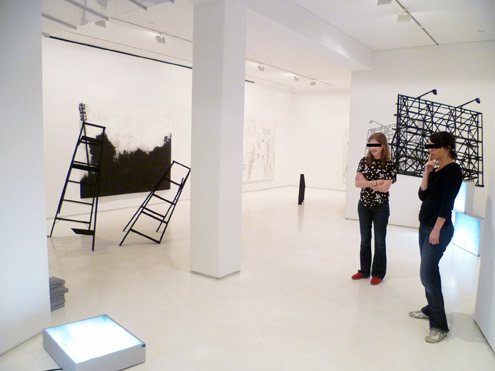 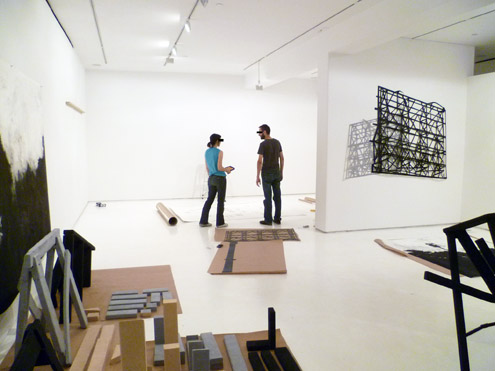 SHOUT OUT to Little Paper Planes

SHOUT OUT to Little Paper Planes for this lovely coverage of Kim Beck's artwork over the years.

Be sure to check out Kim's upcoming exhibition, opening this Thursday at Mixed Greens (6-8pm)!

you saw the skywriting!

There's been an abundance of press coverage for Kim Beck's The Sky Is the Limit, a skywriting project that happened this past Sunday, October 9th. We're sure you saw it if you were out enjoying the afternoon in NYC on Sunday. I personally watched as a few hundred shoppers in SoHo paused to look up at the sky. I saw about a hundred camera phones point toward the sky in unison to capture the words as they spelled out "Lost Our Lease", "Last Chance", and "Now Open". Read some press here: 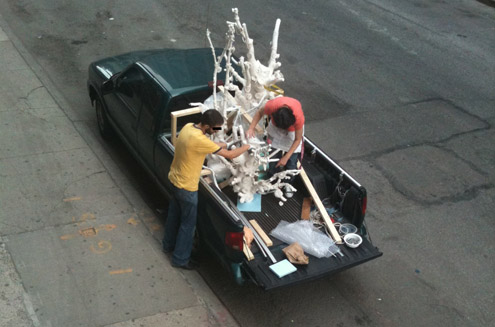 If you were wondering how, exactly, a super fragile sculpture such as Alessandra Exposito's Florifurn Rodentrium gets moved to and from the gallery, I have posted a picture of the Olympian effort by Rob and Alex as they load it bit by bit onto the flatbed truck. 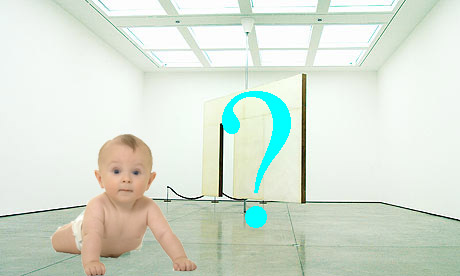 Just in case you didn't have any Saturday plans, you might want to pencil this in...if you have a strong stomach. Or if you're a doctor? Seems like it might be nice to have one of those on hand.

Friday is Fun Day, after all.

Gallery Girl Reality TV and other not so fascinating Friday reading

A little birdie came around our gallery awhile back location-scouting for an upcoming reality TV show that was to be "gallery-based". WEll, the news is out. Welcome to "Paint The Town", the upcoming Bravo reality series dedicated to gallerinas. More info from GalleristNY.com: “[the show] follow[s] the lives of six young, 20-something women that work in New York City’s hippest art galleries.” The show is being produced by Magical Elves, the company that makes Top Chef and Work of Art." UGGGGH. Do you think they'll be filmed sitting at their desk proof-reading press releases?? I wonder where this show is going...

VARA has some issues with mixed results re: site-specific works.

And...apparently the Taj Mahal could collapse in 5 years??? 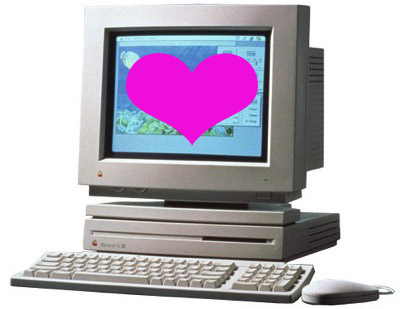 LTB Media has some serious beef with the New York Observer!

Arrested Development is BACK.

If you're in London on November 26th, the Institute of Art and Law is hosting a study forum. Info here.

For those of you who couldn't be in Los Angeles.....

"Siri" is starting to sound more and more like Dr. Falken's Joshua.

Forgive me for not posting these real-time on Wednesday...turns out the iPad is useless for real blogging. Here are some shots of Steven and Sonya preparing our booth for PULSE LA this past weekend. 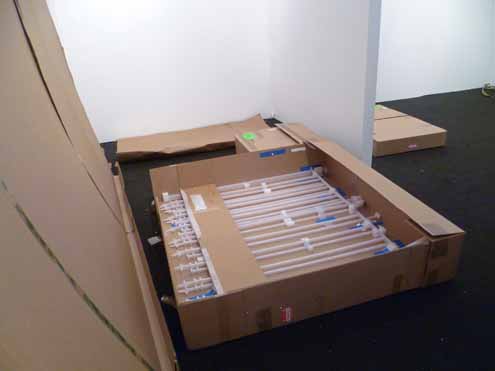 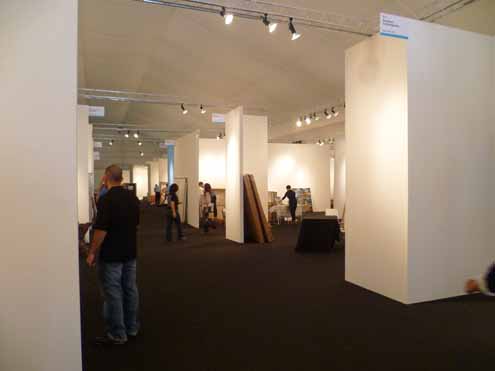 Look at how high the walls were! 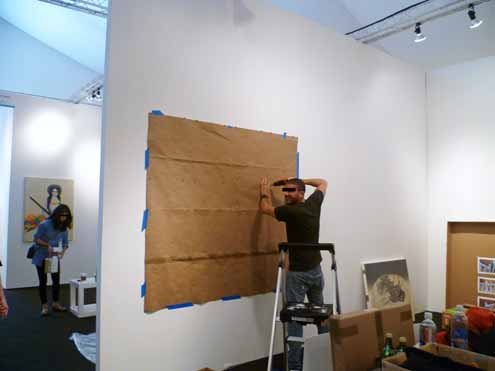 We would have been lost without Rob's grid template. 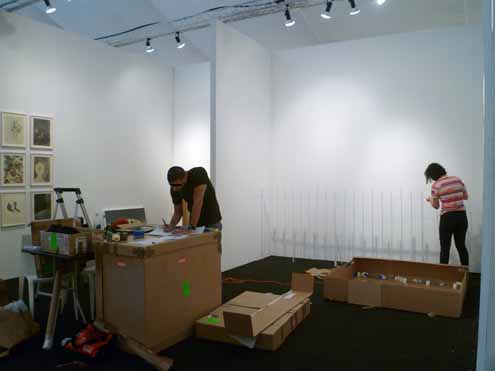 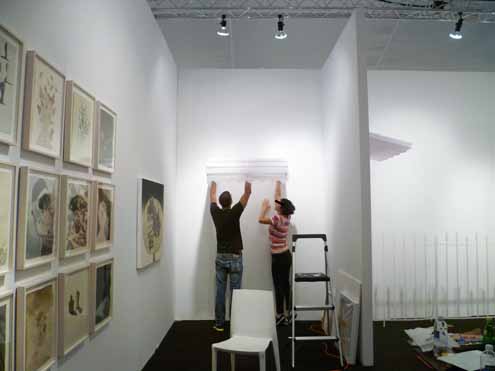 We decided to move the awning. 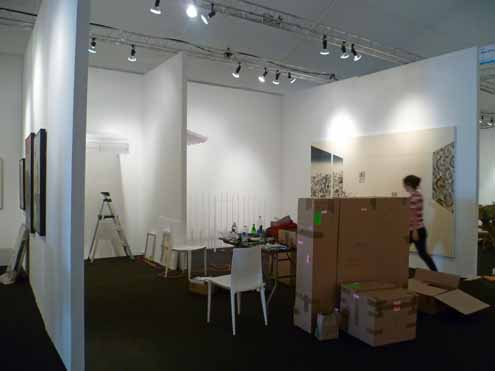 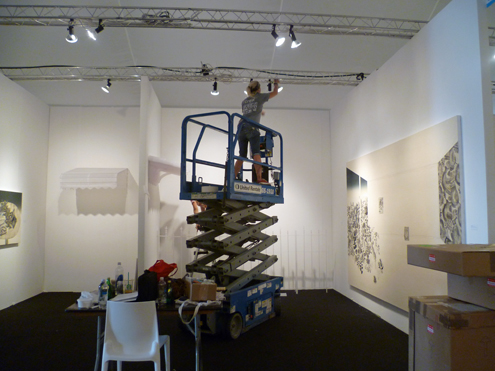 I found myself at MoMA PS1, to see an overwhelming amount of work at the NY ART BOOK FAIR 2011, presented by Printed Matter, Inc. Tables were aligned into every crevice the space had to offer, filled with exciting and new artist' books, catalogs, and zines. There were over 200 exhibitors, including international presses, booksellers, artists, and independent publishers (coming from twenty-one different countries!)

Bob Dylans paintings, are based on other peoples photos?

Kim Beck is Skywriting in NYC!

Next weekend, Kim Beck will post messages in the sky. The project, The Sky is the Limit, takes messages from advertising that publicize fantastic sales and business closings. When drawn in the sky, they become extremely poetic as they fade back into the air.

The skywriting will take place on October 9, between 4 and 7pm, over the west side of Manhattan. If it rains, it'll happen at the same time on October 10.

If you want to participate in the project by taking photos or video from your location, check out this link.