Our next exhibition - "A Great Piece of Turf" by Kim Beck - includes lots and lots of work on paper. Today Rob basically set up a mini framers work station and framed over two dozen drawings! 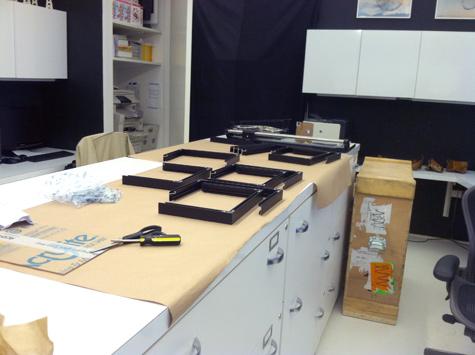 First you assemble the frame bars.. 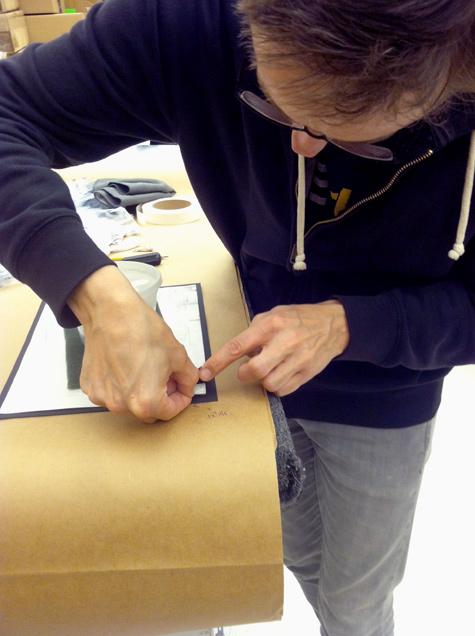 and then you attach the work to a backing,


place the backing in the frame and seal it off. 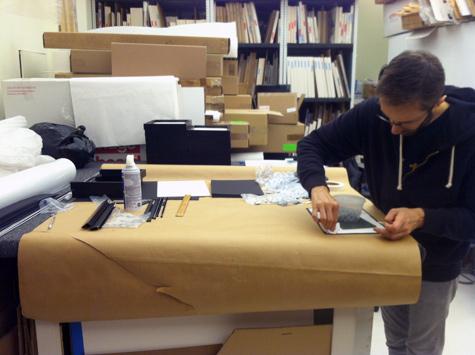 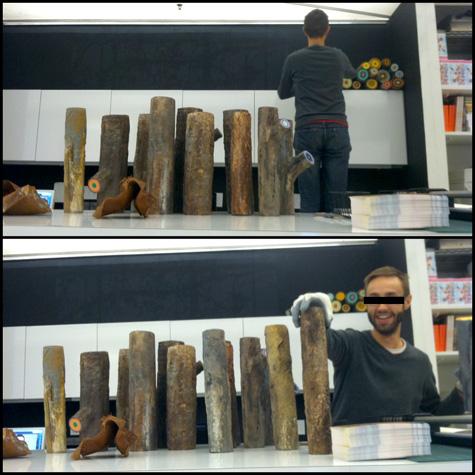 above: rear shot of Rob Carter packing away Kimberly Hart's Cord Wood.
below: Rob Carter exhilarated because he loves his job

I dedicated last Friday to seeing art. First stop The Met, then down to the Lower East Side. Here are a few scenes from the LES: 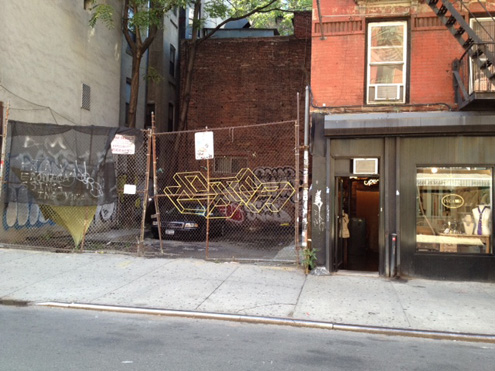 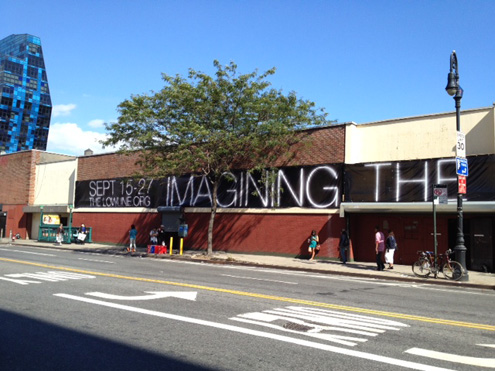 Checking out the plans for the Low Line. 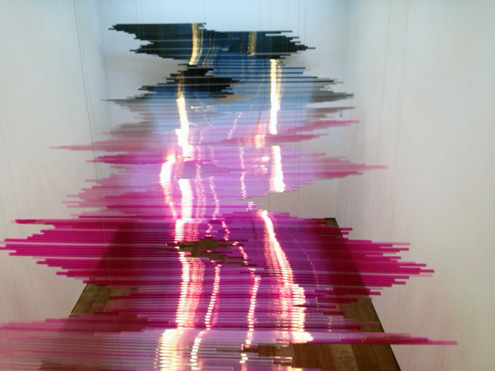 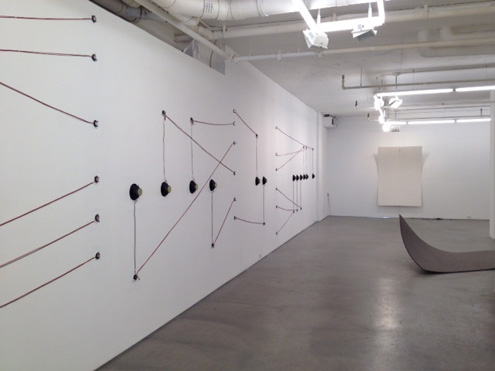 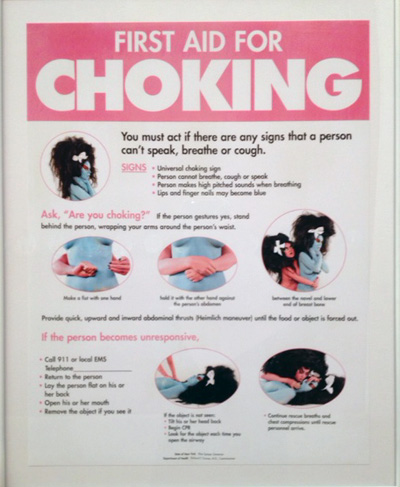 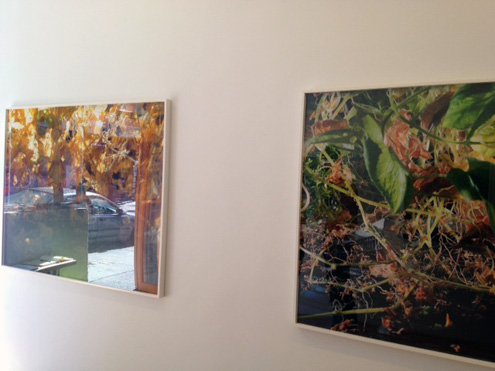 Last but certainly not least, Rob Carter's exhibition at Station Independent. This is a crap photo because there were visitors and an interview going on in the gallery and I didn't want to cause a scene to get a good shot! Amazing show. CHECK IT OUT. Heather and Chuka ventured off to Wassaic today. Little did they know that Heather would be magically transported to a mirror-world with hospital shoe-covers. (She's actually inside the "Infinity Box" - by Ghost of a Dream @ Wassaic Mill) Read more about the Wassaic Project here.

Where in the world is Wassaic, you ask? Find out here. And last but not least, another shot of Rob's backside as he digs through the racks during inventory-day. Because Friday is FUN DAY. Image above: Courtesy of The L Magazine


Photographer and video artist, Rob Carter, will give an audio visual presentation of his work at the Red Hook outpost of Recess Activities, in collaboration with Kidd Yellin. He will discuss the evolvement of his work and screen several animations, including some new unseen projects.

Rob Carter is a 2010 Artist Fellowship recipient of the New York Foundation for the Arts (NYFA). This presentation is co‐sponsored by Artists & Audiences Exchange, a NYFA public program, funded with leadership support from the New York State Council on the Arts (NYSCA). READ MORE by clicking below to see pictures of Rob and Jessie hard at work on the deinstallation of Tuesday. 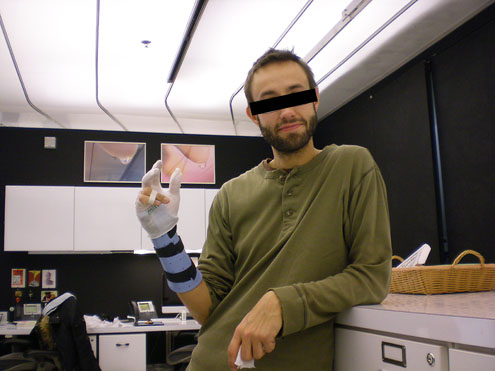 An injured Rob Carter has found a way to style-up his cast: with modified Mixed Greens gloves. 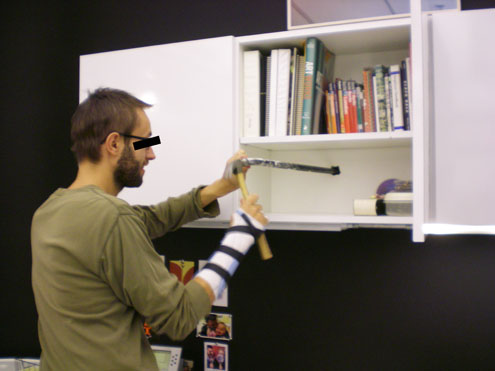 With his broken hand he hammers away, using a crowbar to break through the wall. (This proved of course to be too painful, and Courtney had to take over) 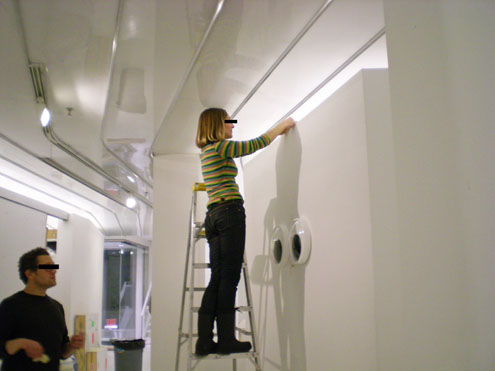 Jennifer Marman & Daniel Borins install their wall sculpture, "Google 2.0". You can check it out in person beginning tomorrow, 6-8pm, at Mixed Greens. 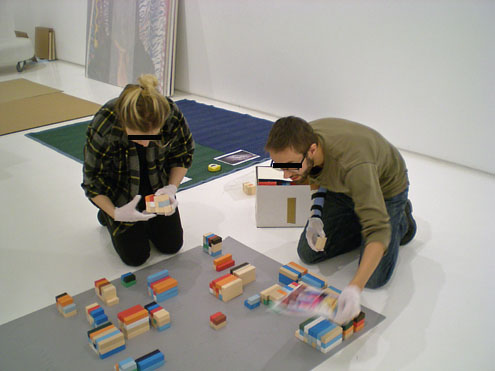 Above: Michelle and Rob are assembling Heather Rasmussen's work. 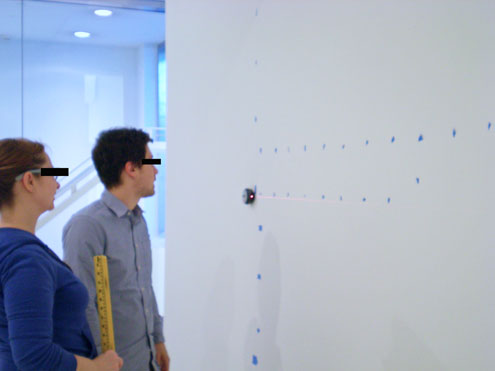 Above: Joy Drury Cox gets some help installing her wall-sized installation.

Rob Carter...back in The Pit 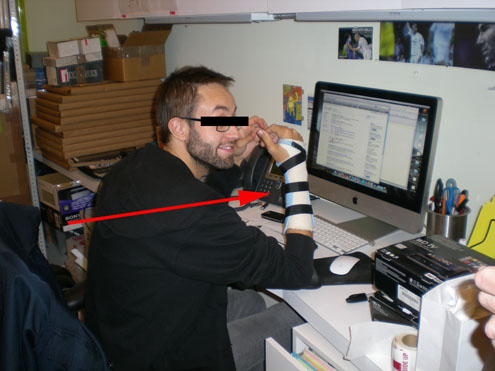 He's baaaaaacccckkk! With a few broken bones, but we'll take him. 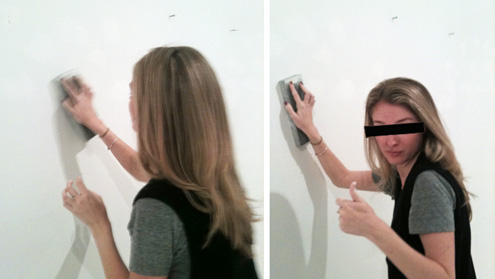 Rob Carter, if you're reading this, look who's learning to make wall repairs...Stay Tuned for Rob Carter's return to Mixed Greens this January (he's currently on residency in Spain) 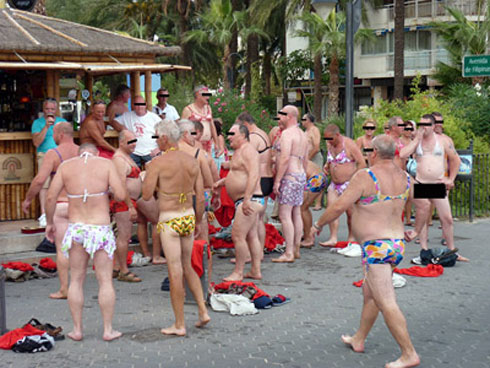 This FUN DAY photo was sent it to us by world-traveler, Rob Carter. Rob did want to make clear that he was not participating in the above "event", but was merely an observer. I felt it fitting to post today since most of the outfits above look a lot like the costumes that Ricky's is selling for Halloween.

Maybe not such a good idea to have a wedding ceremony in a language that you don't understand. Same rule applies for tattoos.

Another SHOUT OUT to Coke O'Neal for his exciting news about the 25 for 25 AOL Grant!

Where in the world is Rob Carter? 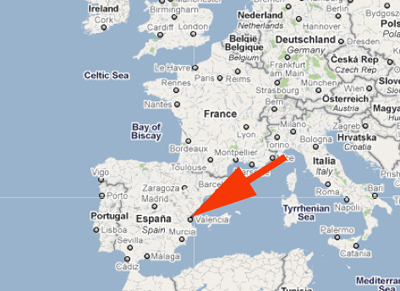 MARK YOUR CALENDAR FOR THESE UPCOMING EVENTS: